Home
Tattoo Meanings
Dinosaurs/Reptiles In The Tattoo Art, Associated With Power And Strength.

Reptiles are among the oldest deities in the history of human beings. They were connected with several Creation legends and stories. From the Native Americans to the ancient Egyptians, the reptiles play a fundamental role in a few indigenous cultures around the world. For example, in the tradition of Mayans, the whole world rests on the back of four crocodiles, while the Egyptian god named Sobek provides life-giving power with the touch of his ankh.

These amazing creatures are also symbols of rebirth and healing. For example, the lizards are known for growing amputated limbs, while the regular cycle of shredding its skin makes the snake a reptile of resurrection. The ancient Greeks knew about this fact and connected this animal with the god of medicine and healing, named Asclepius.

However, reptiles are more than only symbols of rebirth and creation; they are emblems of power and status. So, it is not even a surprise that a few countries, including Jamaica, have incorporated crocodiles into their Coat of Arms. Reptiles are also a common motif for excellent tattoo designs.

Whether you love the seductive power that snakes or crocodiles have, or you are fascinated with the speed and agility of lizards, reptile tattoos are an excellent way to express to the world that there is something more to your story than what the eyes can meet. 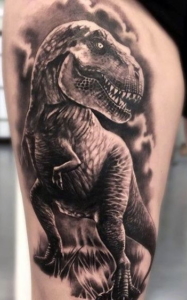 Dinosaurs are the diverse group of reptiles of the Dinosauria clade – a clade means a group of organisms that consist of a common ancestor and all its lineal descendants. The first appeared during the Triassic period, between 243 and 233.23 million years ago. However, the exact origin, as well as the timing of the evolution of dinosaurs, is still the subject of active research.

The term is derived from the Greek words deinos, which means fearfully great or potent, and sauros, which means lizard, even though dinosaurs technically are not lizards.

Dinosaurs became a dominant terrestrial vertebrate after the Triassic-Jurassic extinction, even about 201 million years ago; their dominance continued through the Jurassic and Cretaceous periods according to reverse genetic engineering and the fossil record show that birds are the modern feathered dinosaurs, which have evolved from earlier theropods during the late Jurassic period.

Dinosaurs are the varied group of animals from taxonomic, morphological, as well as ecological standpoints. They are represented on every continent by both extant species, the birds, and by fossil remains. Some evidence suggests that egg-laying and nest-building are additional traits that are shared by all dinosaurs. It is said that dinosaurs became extinct about 66 million years ago.

Although dinosaurs are just another class of animals that lived a long ago, they are symbolically the descendants of mythical monsters.

However, dinosaur tattoos are not the favorite tattoos among tattoo lovers. In general, they are associated with awe-inspiring strength and power. They are one of those tattoo themes which fall in that fun category. The popularity of these tattoo designs went high after the Jurassic Park film in the 1990s.

Dinosaur tattoos have a very small spiritual meaning. Those people that choose these designs tend to associate them with the awe-inspiring power of a snarling t-rex on the hint instead of identifying with the feeling of being outdated. ‘Being a dinosaur’ is a common way of expressing the antiquity of an object.

Usually, the tattoo artwork of dinosaurs depicts the carnivores or reptiles in the act of having dinner. From small and simple velociraptor images to back pieces of amazing scenes of dinosaurs in their environment, these prehistoric creatures have certainly captured the visualization of modern man, tattoo wearers, as well as scientists.

There are a lot of exhilarating dinosaurs in the canon of prehistory, which people could choose in order to cover some part of their body. The range covers several eras, and each time-frame possesses a cornucopia of some breathtaking evolution times. You can even depict several incarnations of these realistic creatures being engaged in combat.

Dinosaur tattoo designs are a rarity since most of the people don’t readily have an emotional connection with these animals. Some of these popular variations include the t-rex tattoos, which are about tyrannosaurus rex, the king of the dinosaurs. They are the most popular animals of this species and are also the main feature of a lot of dinosaur tattoos. The t-rex tattoos are generally connected with untamable power, as well as the strength of these massive beasts.

And, another common variation includes cartoon dinosaur tattoos, which are a shout out to childhood memories and the days of innocence.

Sometimes, when it comes to choosing the right tattoo design, it may be a tricky situation. When you do so, think about what your new tattoo is going to symbolize and where it is going to be placed on the body. After all, dinosaur tattoos are not a bad idea.