The country of Russia stretches across the globe to form the largest country in this world. Like any other country on this planet, it has its good points and its bad ones too. Moreover, politics do not prevent the tattoo world from flourishing in the country. In a country renowned for its variety, scenic wilderness, hospitable, nature and rich history, tattoo artists take inspiration from everything. The world of Russian tattoos and their unique styles is quite rich.

There are many Russian tattoos which became intricate works of art. They detail not just the culture of the people, but a great portion of their personal lives. However, there are tattoos related to political matters. One Russian tattoo which has great importance in Russia is the hammer and sickle tattoo.

Hammer and sickle are one of the most recognizable symbols of communism in Russia. It actually represents the unity of the industrial working class proletariat and rural peasantry.

The hammer and sickle is a symbol meant to represent proletarian solidarity – a union between the working class and peasantry. Russia adopted it as a symbol for the first time during the Russian Revolution. During the time of its creation, the hammer denoted the industrial laborers, while the sickle stood for the agrarian ones. The purpose of creating this emblem was glorifying a changing regime and a re-invented social order.

After the Second World War, and the Russian Civil War, this symbol had more wide use. The country used it as the symbol for peaceful labor within the Soviet Union and even for international proletarian unity. Many communist movements worldwide took it, some with local variations too. 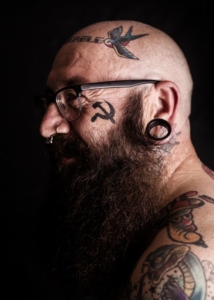 Nowadays, even after the dissolution of the Soviet Union, the hammer and sickle symbol remains commonplace in the country. It also remains in other former union republics. However, other former communist countries, or countries where the law bans communism, prohibit the display of the symbol.

There are a lot of other symbols with similar messages and structures to the original. For instance, the Angolan flag shows a segment of a cog, and a machete crossing it and a socialist star crowning it. Moreover, the logo of the Communist Party of Turkey consists of half a cogwheel that a hammer crosses, and a star is present on the top.

The hammer and sickle were a common theme in socialist realism, but it also has a depiction in non-Marxist popular culture. Andy Warhol, the creator of many photographs, and drawings of this symbol is the most famous example of this.

This is the standard artwork symbol, both for various labor, and communist movements. However, the Soviet artists employed this symbol most frequently. Sometimes called “Soviet Realism” or “Socialist Realism,” this symbol is monumental and heroic, particularly in poster art adapted for tattoos.

Nowadays, the images of the hammer and sickle, not only in tattoos but everywhere, symbolize various things. They do not only symbolize the communist movement but the propaganda techniques and cultural flavor of the time. The hammer, sickle, and a field of red are the symbol of the former Soviet Union.

Being the symbol of equality, the hammer and sickle capture the ethos of rebellion. It also sought to replace the imperial images which became entrenched in the public psyche for generations.

Over the years, this symbol took on several different meanings in tattoos, and generally. As the hammer represents power and the sickle symbolizes efficiency, their union symbolizes power and efficiency.

When its uses are in the context of gender, this symbol implies and encourages the notion of gender equality. The hammer finds its association with man, while the sickle stands for women. Together, they indicate the need for and the importance of having both genders working side by side. This also indicates that their working together is for the betterment of the society in which they live.

Another association of this symbol is with city and urbanity (hammer), and rural backwardness, and village (sickle). Collectively, the two of them represent the harmony between the two ways of life.

Just like we already mentioned, the hammer represents the industrial workers, the urban workers. On the other hand, the sickle is a representation of the agricultural workers and the peasants.

Both these groups of people were poor, exploited, and also oppressed to the benefit of wealth.

Some of the reasons why people get the hammer and sickle tattoo are the following:

If you get a hammer and sickle tattoo to represent the unification or working for social class, it will become the symbol of much more than that. It will be hard to separate the two meanings from each other.

Who says the spooky holiday season has to