As there is an endless amount of stars in the universe there are also an endless number of ways to personalize this image for your tattoo. Stars, as the oldest symbols in many cultures, religions, and belief systems carry various meanings. The star design is combined with other images in order to add further meaning to the tattoo, as well as to create a more intricate and interesting design. 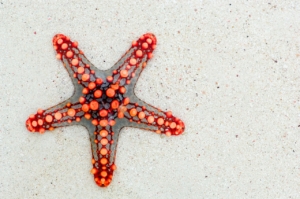 The Meaning of Star Tattoos:

As we said, the variations of star tattoo designs are potentially limitless, and the meanings they can impart are equally numerous, but also incredibly personal to the individual getting the tattoo. Here are some of the most popular ones:

A little star tattoo can carry a big meaning. A perfect way to depict a little star tattoo is to get a simple outline of a star; this can be placed almost anywhere on the body, from an ankle to behind an ear, and getting only an outline done will ensure the tattoo is finished quickly and painlessly. Another little star design is to get a small, twinkling star done. This can be any color that you want, but simplicity is the key: aim for plain black or yellow. Adding a bit of twinkle can reflect your sparkling personality, or demonstrate that you’ve achieved something meaningful or important in your life.

Shooting stars or comets are often symbols of good luck, and getting this star tattoo design can be representative of your own good fortune in life. Often these designs will feature the comet’s tail, which could be a trail of stardust or a series of smaller stars. Adding this detail to your design will help to cover a larger area than a little star tattoo would. One great way to personalize this design is to play with color: if you are a stickler for astronomy, you may choose to get only yellow hues done, but if you have a quirkier, whimsical side, consider using a rainbow spectrum color scheme.

Chain tattoos are becoming increasingly popular among both men and women, primarily because they can symbolize a variety of things to the wearer. One way in which you can personalize this tattoo is to incorporate star imagery, which can be done in a few different ways. First, the links of the chain can be formed into a star shape, demonstrating that the wearer is unbreakable and cannot be bound. Another possibility is to have a star pendant or charm placed on a chain tattoo that goes around the wrist or ankle, like a bracelet design. Such a star can be done in whatever style and color means most to the individual, such as a Star of David if the person is Jewish or a Celtic star if the person has ancestral ties to that culture.

A tattoo of a pink star is often used to symbolize one’s struggle with breast cancer and is a great alternative for the tattoo depicting the traditional pink ribbon. When inked with black in the style of a nautical star tattoo, the pink star becomes an almost ‘punk rock’ or ‘alternative’ symbol for one’s battle with breast cancer, making a truly unique star tattoo design.

Butterflies are considered as a symbol of rebirth, and combining them with stars can create a unique image that signifies both rebirths and striving towards particular goals, represented by the stars. This particular design is often quite feminine in color and design. Vibrant hues of pinks, purples, oranges, and blues are used for both the butterflies and stars, and the stars themselves will often include a twinkling effect. This tattoo can also be adapted to whatever size you want it to be.

Clouds symbolize several different things across cultures and mythology from all around the globe. In Greek and Roman mythology, the clouds served as the home of the gods, and many people today believe storm clouds symbolize bad luck or danger to come. Depending on what you want the clouds to symbolize, therefore, your stars and clouds tattoo design will mean one of many different things. For instance, a design that incorporates stars into a sky of storm clouds demonstrates that you have gotten through tough times in order to accomplish your objectives. Another good idea would be to have bright yellow stars amid a field of white clouds, symbolizing that those you have lost are in a better place.

This star tattoo can be quite feminine, and often points to the wearer’s fanciful imagination or longing for a better reality. One potential design incorporates a fairy sitting on a crescent moon, with twinkling stars in front of her: the fairy’s longing for something more can be seen in her downcast face, with the stars symbolizing the dreams she has for the future. Another tattoo design that’s a bit more whimsical would feature a fairy flying among the stars, demonstrating your self-belief and progress towards your goals.

Getting a heart and star tattoo is a very fun, positive, and cute statement to the world: life is pretty good and you see the best in things. There are several designs of a heart and star tattoo. If you want to keep things small and simple, getting outlines of both shapes is a great idea, especially if you have them overlap on one side. Another design idea is to get an outline of a heart, but with one half of that outline made up of small stars. If you want something more vibrant, choose a design using different colored and shaped hearts and stars to create a great statement piece on your back or side.

Flames and fire can be part of almost any of the star tattoo designs mentioned above. The element of fire can indicate aggression, anger, desire, transformation and change, and your willingness to burn through anything in order to achieve your goals. Combining flames with stars in your tattoo design symbolizes your own success, or that you have gone through the flames of life and come out the other side even stronger. This tattoo can be with any size, with many opting for entire sleeves or lower leg tattoos done in this design, but the image is as equally powerful when done on a smaller scale, such as the shoulder blade or inside a wrist. To help easily differentiate between the flames and stars, keep the flames in their natural red and yellow colors but choose something darker for the stars, such as a deep blue or black: this will make them stand out instantly.