We can all agree that there isn’t a television character that is more iconic than Homer Simpson of the animated sitcom called The Simpsons. The Simpsons is a creation by Matt Groening creation that originally appeared on December 17, 1989, and Homer J. Simpson has been one of the favorites right from the start.

Since the first time it aired on December 17, 1989, The Simpsons never looked back as the show is still going as strong as ever today. The story is about a typical middle-class family who resides in Springfield.

Homer Simpson, the head of the family, works for the Springfield Nuclear Power Plant, which is a bit ironic because, for being such a seemingly important position, Homer isn’t the brightest guy. However, even his incompetence helped in the creation of a fun family, loved by viewers for many years.

Homer’s wife is named Marge. Marge is a normal American housewife, and they have three children together. Homer’s son is the rambunctious Bart Simpson. He also has two daughters. Lisa is the eldest, smart daughter, and the baby, Maggie, who’s the only source of communication is through the sounds of her sucking on her pacifier. They have two pets, the family dog named Santa’s Little Helper and the cat called Snowball.

Among those stories that revolve around this quirky family, there are lots of interesting and strange supporting characters that make this show as popular as it is. However, some of the best episodes revolve around the main character Homer, which is the particular reason why he is a popular image in the world of tattoos.

Being one of the most influential characters on TV is why, for so many people, Homer is an iconic character. The Sunday Times, a British newspaper, described this character as the “greatest comic creation of modern time.” He is in the same range as Bugs Bunny as the best television character of all time. Besides that, he was awarded a star on Hollywood’s famous Walk of Fame.

The episode named “Homer at Bat” is from the third season of the show in 1992. In this episode, the Springfield Nuclear Power Plant workers are thinking about whether to join the work softball team because of their failures during the previous season. However, Homer convinces the workers to join the team after he informs them that he made a bad out of a fallen tree branch that he dubbed “Wonder Bat.” His statement was enough for the plant workers to enter the team, and eventually, they ended up making it to the championship game.

The Springfield squad faces off the neighboring Shelbyville Nuclear Power Plant team. Sure, for his team to win, Mr. Burns made a million-dollar bet with the owner of the Shelbyville team and brought in a group of ringers, including former MLB stars.

Due to several unfortunate events, eight of the nine all-stars were not able to play in the game. Fast forward to the end of the game, the score is tied, and the bases are loaded. Mr. Burns decides to replace Strawberry with Homer to have a right-hand hitter face the lefty pitcher. Homer is hit in the head and knocked unconscious, but the game is won, and he becomes the hero of the game.

As a tattoo design from this particular episode, you might see tattoos of Homer in uniform holding Wonder Bat, which is one of the more popular images of Homer Simpson. 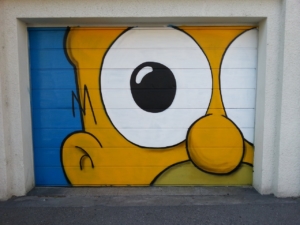 Homer the Heretic is from the fourth season. In this episode, Homer makes a decision that he doesn’t want to go to church one Sunday based on the weather and the sheer boredom he feels while he’s attending. Marge isn’t happy but goes ahead without him. In the meantime, this is one of the best days in Homer’s life. He makes waffles, ménages to win in a radio contest, finds a penny, and watches football, amongst other things.

Because of how wonderful this day was for him, he declares that he is never going back to church. His wife is not happy about that and prays for him that night. A furious God visits Homer in his dreams, but Homer explains to him that he isn’t a bad man and takes care of his family. God gives Homer a pass and allows him to worship as he feels. Homer accepts this as a sign to create his religion in which he creates holidays to miss work.

In short, Homer accidentally burns the house down, and for him, that is a sign from God and promises to go back to church every Sunday.

The tattoo about this episode might include Homer dressed in robes, or you may see the tattoo version of God from that episode.

There are too many episodes to count, but the two episodes above are recognized as two of the most popular Simpsons episodes ever, let alone just being Homer episodes. Homer Simpson is a cultural icon. No matter whether you are a fan of the show or not, you need to recognize the power of The Simpsons, Homer Simpson, in particular. His popularity has been the reason for many Homer Simpson tattoos around the globe.