Trees are a significant part of Mother Earth, and their majestic presence has garnered them admiration from a lot of different cultures. They were extremely important for most cultures throughout history. The tree was always seen as a symbol of life, and tree tattoos date back thousands of years to the origins of tattoo art. The tree is also considered as one of the richest symbols, and in a tattoo, it can symbolize a lot of different things at once. Trees are perfect examples of how to live, grow, as well as transition, change, and even die with grace. 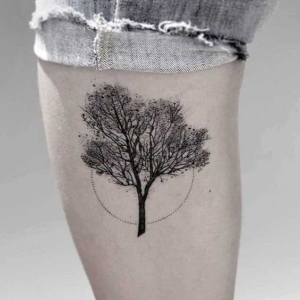 These tattoos can be designed in a lot of different ways: Some of them focus on the bark of the tree, while others depict the branches; some of them have a lot of leaves, while others may have very only a few or none. Some tree tattoos may portray a forest, an orchard, or one single tree, and some of them even include the roots. Flowers or some other designs might also be incorporated in the designs. Here, we will pay particular attention to tree branches.

When the flood receded, a dove brought an olive branch to Noah. It was not only a symbol of dry land but also pardon, peace, as well as salvation. The known peace symbol of a dove and olive branch has an interesting background. Even though it was initially used by Christians, it is derived from some other sources. The use of the olive branch dates back to ancient Greece, five centuries before Christ. Irene, who was the goddess of peace in Greek religion, was said to be very fond of the olive.  To the ancient Greeks, the olive tree represented abundance and was also believed to be able to drive away evil spirits.

In medieval art, the branch sometimes represents logic; other times, it represents purity or the rebirth of spring. The branch is used effectively as a tattoo design, and it is sometimes depicted with flowers or buds, and sometimes without, but it is always evocative of life.