Various devices and objects find their uses in tattoo art, and one such device is the hourglass. There are amazing hourglass tattoo designs these days. Below, we will talk about the origins of the motif, its function, and its use in tattoo art.

An hourglass, sandglass, sand timer, or sand clock is a device that finds its uses in measuring the passage of time. It comprises two glass bulbs that a narrow neck connects.

Factors that affect the time it measures include sand quantity, sand coarseness, bulb size, and neck width. You can reuse hourglasses indefinitely by inverting the bulbs once the upper bulb is empty.

Depictions of the hourglass in art survive in large numbers from antiquity to the present day. These were quite common sculpted as epitaphs on tombstones or other monuments. 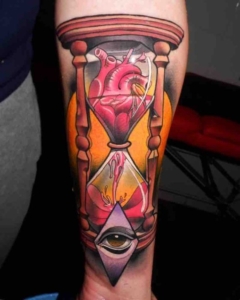 The origin of the device is still not clear. Its predecessor, the clepsydra, or the water clock, existed in Babylon and Egypt somewhere in the 16th century BCE.

There aren’t records of the hourglass existing in Europe before the Early Middle Ages. The first supporting evidence appears from the 8th century CE, and a Frankish monk named Liutprand crafted it. However, it wasn’t until the 14th century that the device was commonly present. The earliest firm evidence was a depiction in the 1338 fresco Allegory of Good Government by Ambrogio Lorenzetti.

The use of marine sandglass happened for the first time in the 14th century. The written records about it mostly come from logbooks of European ships. At the same time, it appears in other lists and records of ship stores.

The earliest recorded reference refers to a marine sandglass dating from c.1345, in a receipt of Thomas de Stetesham. He was the clerk of the King’s ship La George, during the reign of Edward III of England.

The marine sandglasses were very popular onboard ships, as they were the most dependable measurement of time at sea. Unlike the clepsydra, the motion of the ship during sailing didn’t affect the hourglass. The fact that the hourglass also uses granular materials instead of liquid gives it more accurate measurements.

Seamen discovered that the device had the ability to help them determine longitude, distance west or east, with reasonable accuracy.

The hourglass was a symbol of the passage of time and the transitory nature of human experience since ancient times. In that way, it implies a memento mori, a reminder of mortality. However, as we can turn it upside down, and it will start all over, it is also associated with the notion of symmetric cycles, and reversals.

For instance, in prison tattoos, the hourglass and the clock are specific reminders of the “time” served.

The hourglass is one of the trending and innovative designs. As much as the history behind the design isn’t known, the meaning is quite clear. The hourglass tattoo design represents the passage of time. According to a lot of historians, the two connected glasses with sand still seem a mystery.

Wearing an hourglass tattoo design will be an excellent way of expressing the mysterious sides of a personality. For such a personality, a person may lack the right words to explain.

The symbol of the object is present on many items in England, and it expresses various meanings. The meaning of the hourglass tattoo designs stems mainly from the eternal passage of time. Many men and women wear this tattoo design for its decorative value. However, its main value is as a symbol. The hourglass, which is older than the clock, was the symbol of time for many centuries.

Time is precious and also limited. Many people don’t value time like they should until it is too late. One day or another, time, just like the sand in the hourglass, is going to run out. The truth is that time goes by in a blink of an eye. Sometimes, we have to remember that time is really valuable. This device will be a perfect reminder for this purpose.

The hourglass tattoo will be an excellent choice for any woman or man who values life. We usually take life for granted, and we forget that it is a gift and not a privilege.

Just like we already mentioned, this may be the symbol of time and many other things.

Our hourglass tattoo can represent anything that we want, but we have to remember that the world at large is going to be reminded of these several meanings:

Hourglass tattoo can also appear in many different designs, with different symbols, decorations, and elements. Even though the device usually holds sand, we can also use water or even blood in the tattoo design.