Tattoos are a creative way of expressing ourselves, and this body art is present since ancient times. Traditionally, people used tattoos not just to enhance their image, but to identify a clan or tribe. Of course, those tattoos that we see nowadays are very much different from the traditional ones. With an unlimited choice in tattoo designs nowadays, finding the appropriate one may seem hard. If you are thinking about which tattoo to get, which is going to fit your personality, then what about getting an amazing koi fish tattoo? Koi fish tattoos are in vogue since a long time ago. They are one of the most colorful tattoos that men and women equally love. 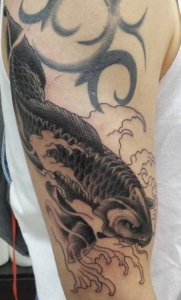 Koi are the colored varieties of Amur carp, which people often keep for decorative purposes, in outdoor water gardens or ponds. Koi is actually the informal group of the colored variants of the C. carpio. Japanese people also recognize a few varieties. You can distinguish koi varieties by coloration, escalation, and patterning. Some of the major colors are black, white, red, yellow, orange, blue, and even cream. The most popular category is Gosanke.

Carp are actually a large group of fish present in Asia and Central Europe. East Asia originally domesticated various carp species, and there, people used them as food fish. Carp are coldwater fish, and their capacity to survive and adapt to various climates and water conditions permit them to live in various locations, including Japan.

Natural color mutations of these carp happened across many populations. Carp were bred for the first time for color mutations in China more than a thousand years ago. Here, selective breeding of the Prussian carp led to the development of the goldfish.

The Amur carp is a member of the cyprinid family species complex native to East Asia. It was aqua-cultured as a food fish at least as long ago as the fifth century BC in China. People recognized it previously as the subspecies of the common carp. However, recent authorities treat it as a separate species under the name Amur carp or C. rubrofuscus.

The outside world wasn’t conscious of the development of color variations in Japanese koi until 1914. From that time on, the interest in koi spread throughout Japan. From this original handful of koi, people bred the other varieties of fish. The hobby of keeping koi started spreading around the world since those times. Nowadays, many pet aquarium shops sell them.

The word koi comes from the Japanese reading of Classical Chinese words. In both languages, koi can refer to many Asian carp species. In Japanese, koi is actually the homophone for another word meaning love or affection. That’s why koi are symbols of friendship and love in Japan.

Probably surprising to many Westerners is a large amount of myth surrounding the beautiful koi fish. Outside of Japan, people know this fish as a brightly colored white, orange, golden, and even calico fish. It fascinates private collectors; however, it can also be present in public ponds.

The Japanese carp or koi is definitely the most popular, as well as beautiful of Japanese tattoo symbols. It is a beauty that belies its symbolic meaning. Even though the carp is Chinese in origin, people in Japan celebrate it for its many qualities.

Koi is the Japanese word for carp. Japanese people used koi fish tattoo designs as cultural symbols for overcoming adversity. There are many stories about koi fish climbing waterfalls with strong currents bravely.

For example, a koi fish tattoo with running water is the symbol of courage, and the ability to attain goals. It also symbolizes overcoming the difficulties in our lives. When you depict the fish to be swimming upstream, it will symbolize that you still struggle with problems. On the other hand, when you depict it swimming downstream, it implies that you already overcame your difficulties.

Moreover, it means love for the opposite sex or longing for a specific person. You can describe this love as passionate or romantic love. In Buddhism, for example, the koi fish represents courage and fearlessness. Koi fish are very brave fish, as they dong quiver like other fish when caught. This bravery and fearlessness trait is compared to the samurai warriors. The beauty and the charm of this fish are what makes it a popular symbol for family, particularly in Japan.

The koi fish may also represent the following:

If you think that this tattoo symbolizes you and your personality, research well about the design and placement of it. Tattoos aren’t something that you want to go for impulsively. Always look for the one which is unique, best expresses you and corresponds to your personality traits.