There are a lot of tattoos that do not only have their associations with art but also with religion. One of the religions in the world, which has a close association with tattoo art, is Buddhism. Buddhism is an ancient religion that has its roots in countries and cultures all over the world. This religion finds its basis on the teachings and principals of Buddha. He is the religious leader of Buddhism. Every Buddha tattoo is meant to replicate the teachings of this great leader, as well as a mentor. The tattoos are not only common among the followers of this religion. A lot of people who believe in the ultimate truth of life practice them. Those people believe that one has to overcome all temptations and sufferings to reach the stage of salvation or nirvana.

Before you can even think about getting inked with Buddhist tattoos, it is quite important to take the time to understand Buddhism. Buddhism has its long history, comprise of complex traditions and fundamentals. Those of you that find Buddhist tattoos attractive should take into consideration various things before getting the tattoo.

Here, we will talk about the tattoo of Hotei, one of the Seven Gods of Good Fortune of Japan. He is the famous Laughing Buddha, the god of prosperity and happiness, with a giant potbelly, and round smiling face. 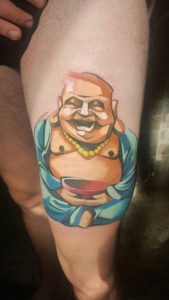 Hotei, or also called Budai, Pu-Tai, or the Laughing Buddha, was a semi-historic monk and deity, introduced into the Japanese Buddhist pantheon. He lived somewhere around the 10th century in the Wuyue kingdom. His name means “cloth sack,” and refers to the bag which he carries while he wanders.

His jolly nature, humorous personality, as well as eccentric lifestyle, distinguishes him from most of the Buddhist masters or figures. He is almost always laughing or smiling. His other name in Chinese is the Laughing Buddha.

The main textual evidence that points to Hotei resides in a collection of biographies of Zen Buddhist monks, titled Jingde Chuandeng Lu, or The Transmission of the Lamp. His origins come from local legends and cult worship. Traditionally, Hotei represents a fat, bald monk that wears a simple robe. He also carries his few possessions in a cloth sack, being poor but content.

In the mythology of Japan, just like in Japanese tattoo, Hotei is probably the most identifiable of the Seven Lucky Gods. He is the famous Laughing Buddha, and he is said to be the god of happiness and prosperity.

In tattoos, the Seven Lucky Gods are present in a large piece that covers a good part of the body. A humorous placement of the big-bellied Hotei is sometimes on the belly itself.

Just as Buddha statues in various states offer different symbolic meanings, tattoos of Buddha have equal significance. There are many variations of the Laughing Buddha tattoo, each of them portraying specific aspects of his life.

When you see tattoos of Buddha, in which he laughs with his big round belly, they probably depict reincarnation. Those that choose this particular tattoo design do that because it is the symbol of the separation of material goods. It also means that they have a great sense of humor, or have a spiritual connection to the meditative mind.

When something isn’t going well in your life, the tattoo of Laughing Buddha will bring you happiness and good fortune. This tattoo is suitable for the people who search for the light-hearted version of Buddha instead of the spiritual one.

Laughing Buddha depicted with the sack means that he collects the sadness of people, and puts it in the sack. However, another version of Buddha carrying sack is said to be lucky, and it brings prosperity and wealth. The usual placement of this tattoo is on the stomach, with the belly button of Hotei corresponding with one of the bearers of the tattoo.

The tattoo of Laughing Buddha can also be a symbol of happiness and joy. It can even eliminate all sorrows and problems. You can ink only the face of Laughing Buddha, particularly on your arm, shoulder, chest, side, wrist, or leg.

If you suffer from an unstable health condition, Laughing Buddha sitting in meditation posture will keep you calm and relaxed. Moreover, this tattoo design will help you overcome every obstacle in your life.

Generally said, the Hotei tattoo designs can represent happiness, being carefree, enlightenment, having positive values, and willingness to help others. Moreover, they can represent enriching beliefs and the need to improve constantly.

I hope you like the tattoo of Laughing Buddha!