The Shichifukujin are a group of deities or gods from China, Japan, and India. Only one of them is native to Japan and the Shinto tradition of Japan. Three of these gods are a deva, from the Hindu pantheon of India and three are gods from the Taoist-Buddhist cultures of China. The Japanese deity is called Ebisu, the Indian are Benzaiten, Bishamonten, and Daikokuten, and the Chinese are Fukurokuju, Hotei, and Jurojin.

Nowadays, some images of the seven deities appear with great frequency in Japan. In one quite popular tradition in Japan, they travel together on their treasure ship, and they visit ports on New Year’s Eve to spread happiness to the believers. Children are told to place a picture of this ship or better known there as Baku, the nightmare eater, under their pillows on the evening of the 1st of January. Some local costumes even say that if they have a good dream that night, they are going to have luck for the entire year. 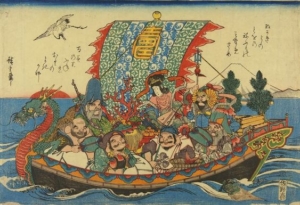 Each of the deities existed independently before the artificial creation of the group in Japan. The origins of the group are still not clear, even though most scholars point to the Muromachi ear, the period from 1392 to 1568, as well as the late 15th century. By the 19th century, a lot of the major cities developed some special pilgrimage circuits for the seven deities. They remain well-trodden in contemporary times, but a lot of people now use cars, buses, or trains to move between sites.

The seven members of the group varied over time and did not become standardized until the 17th century. At the start, Benzaiten has not been a member of the ensemble. One configuration has included both Kichijoten and Benzaiten but also excluded Fukurokuju. Nowadays, the standard gods group consists of Ebisu, Daikokuten, Bishamonten, Benzaiten, Hotei, Jurojin, as well as Fukurokuju.

As it has been said, the seven auspicious deities were first believed to have been grouped and given the name Shichifuku, at the time of the Muromachi period. First, the members of the group were not fixed, and Benzaiten became one of the seven later on. The group of seven may derive from the Chinese subject of Seven Sages in a Bamboo Grove, or the Wei, as well as Jin period 220-420 AD or from some famous Buddhist term in the 8th century Ninnōgyō Sutra given therein as ‘Shichinan Sokumetsu Shichifuku Sokushō which means seven adversities disappeared, and seven fortunes arose. From the 15th century on, the Shichifukujin has gained in popularity, particularly among some urban merchants and artisans, being an auspicious omen and motif of good fortune and longevity, and appear in a lot of painted, sculptured, and even printed examples.

Some references of earlier to abbreviated assemblage of two, three, or five of these deities date to the texts of the late 15th century, which were about some popular narrative tales and comic plays, and which also mention lost paintings of them. Maybe just in the second half of the seventeenth century did the conception of the seven deities of good fortune coalesced. However, even then, the set did not become universally standardized.

It has been said that this influential group of deities resembles the seven wise men of the bamboo thicket, or even the seven wise men of the wine cup, whose images are quite popular in China. The group of Japan was created in the 17th century by one monk named Tenkai, who wanted to symbolize the essential virtues of the man of his time for the Shōgun Tokugawa Iemitsu.

Some sources even explain that Tenkai has identified the individual gods with seven virtues, such as longevity, popularity, dignity, fortune, sincerity, magnanimity, and amiability that kings impart to their subject if they follow the teaching of the Sutra of the Benevolent Kings.

On the night of New Year, the seven gods enter port together on their Takarabune, or treasure ship, to bring happiness to everyone. On the night between the 1st and the 2nd of January, according to tradition, children put a picture of the seven beings on their treasure ship under their pillow, or a picture of the mythological Baku, which we already mentioned. If they have a lucky dream that night, they will be lucky the entire year – also, they should not tell their dream to other people, as if they do, they forfeit its power. However, if they have a bad dream, they should pray to Baku, or set their picture adrift the river or sea to forestall bad luck.

By the 19th century, a lot of cities developed special pilgrimage circuits for the seven deities. Such pilgrimages are still well-trodden in the modern world, particularly during the first three days of January.

However, today, a lot of people use cars, buses, and even trains which give them the capacity to move between the sites instead of walking. In order to document their journeys, some pilgrims purchase a rectangular stamping sheet at their first location, which is called a Kinen Shikishim. Then they present it to each successive temple or shrine for stamping.