Oftentimes, the first sign that a lizard is nearby is the blood-curling scream of a frightened person. Of all the reptiles existing on our planet, lizards and snakes are the ones that scare people the most. However, these small animals are terrified of us than we are of them. So is our fear of these creatures really justified? 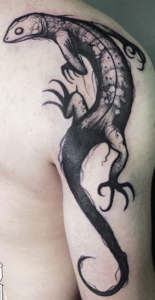 Maybe it will be a surprise for you that lizards have had a significant place in human history for thousands of years. For instance, the ancient Moche people of northern Peru and several Aboriginal tribes held lizards in high esteem. They usually included their image in numerous pieces of iconic artwork.

The Greeks and Egyptians also associated wisdom and good fortune with these little creatures. The Egyptian hieroglyphic for “abundance” and “wealth” is the symbol that bears a striking resemblance to a lizard.

Nowadays, but also in the past, the lizard was a common motif for beautiful tattoo artwork. That’s why here we will talk about lizard tattoos and their meanings in the tattoo world.

Lizards are an enormous and widespread group of squamate reptiles. There are more than 6,000 species, ranging across all continents except Antarctica and most oceanic island chains. The group is actually paraphyletic because it excludes the snakes and Amphisbaenia.

Some lizards are more closely connected to these two excluded groups than they are to some other lizards. Lizards can actually range in size. They appear from chameleons and geckos a few centimeters long to the three-meter long Komodo dragon.

Most of the lizards are quadrupedal, which means that they run with a strong side-to-side motion. Other types are legless and have long snake-like bodies. Some like the forest-dwelling Draco lizards have the ability to glide.

Usually, lizards are territorial, the males fighting off other males and signaling, usually with bright colors, to attract males and intimidate rivals. Mainly, lizards are carnivorous. They are usually sit-and-wait predators. A lot of smaller species eat insects, while the Komodo dragon eats mammals as big as water buffalo.

Lizards use many anti-predator adaptations, which include venom, reflex bleeding, camouflage, and the ability to sacrifice and re-grow their tails.

Even though known worldwide in mythology, the lizard appears most frequently in Polynesian culture. It appears from Hawaii to New Zealand, sometimes as a creator of the human race and other times as a very powerful ancestor.

Lizards used in tattoo art seem to draw from all types of artistic motifs. They range from that of the Pueblo Southwest to decorative images from Africa. Sometimes, people see the lizard symbolically as akin to the snake. There are certainly similarities, like the shedding of skin, hibernation, and underground dwelling. All these things are symbolic of renewed life.

Lizards are popular reptiles that were a motif in a lot of cultures and civilizations. Lizard tattoos aren’t considered as very popular tattoos. However, those people who get the lizard tattoos love the unique meanings that the creature actually represents.

Lizard tattoos are an excellent way to express a lot of personality traits and deep symbolism. Here are the most common symbolic meanings of lizard tattoos:

Lizards were the subject of art since ancient times. Their symbolism is rich in meaning too. Whether it is their exceptional adaptability or their agile nature, lizard tattoos can make really eye-catching designs that resonate with everyone.

Lizard tattoos are most attractive when the artist represents the animal curled and contorted into shapes. In that way, the sleek look of the design is also emphasized.

The most creative pieces are the ones that you place at a place on your body that will give the illusion of a moving tattoo. This actually requires a bit of knowledge about human anatomy to make the tattoo come alive. Also, this will make the illusion look amazing and flawless.

Some of the most common lizard tattoo design variations are the following:

Designing your perfect tattoo will require you to think long and hard about several factors. What your design will symbolize or where will it be placed on your body? Does it fit your personality and general style, and will you combine it with other different elements?

Choosing an appropriate tattoo design can be a very hard thing. However, you do not have to struggle through the process alone. You can consult with your artist and with other people, or you can search on the internet in order to see if it will be a good tattoo for you. Research more about lizard tattoos and their meanings, and see if you would like to place one such on your skin or not.