Reptiles, as a class of animals, constantly find their uses in tattoo art nowadays. They are tetrapod animals that belong to the class Reptilia also with turtles, snakes, crocodilians, lizards, tuatara, or other extinct relatives. The study of these traditional reptile orders, historically combined with one of the modern amphibians, is known as herpetology. 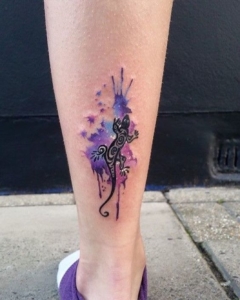 Lizard tattoos aren’t a mainstream tattoo choice. However, in several unique places in the world, they are a famous and symbolic figure. They come in a variety of different variations, as there are different types to take into consideration too. For example, it can symbolize value. Some other meanings may simply fit the person’s personality.

However, here we are going to talk about one specific type of lizard, called Gecko. Below, you can read something more about it and its use in tattoo art.

Geckos are lizards which belong to the order of Gekkota, which are found in warm climates around the world. They range from 1.6 to 60cm. Most of the geckos cannot blink, but they usually lick their eyes to keep them moist and clean. They have a fixed lens within each iris, which enlarges in darkness to let in more light.

Geckos are unique among other lizards in their vocalizations, which differ from species to species. They utilize chirping or clicking sounds in their social interactions, and sometimes when alarmed. They are probably the most species-rich group of lizards, with about 1,500 different species around the world. The New Latin “Gekko” and the English “gecko” stem from the Indonesian-Malay “gēkoq” which is imitative of sounds which some species make.

All geckos, except the species in the family Eublepharidae, lack eyelids. Instead of eyelids, the outer surface of the eyeball has a transparent membrane, the cornea. Species that don’t have eyelids generally lick their corneas when they have to clear them of dirt and dust.

Nocturnal species have excellent night vision; their color vision in low light is actually 350 times more sensitive than in humans. The nocturnal geckos evolved from diurnal species that had lost the eye rods. Therefore, the gecko eye modified its cones that increased in size into various types, both double and single.

Gecko lizards appear in virtually all warm areas of the globe, and so they form part of the symbolism of many cultures. Almost unanimously, the Gecko symbolizes good luck – from Guam to the American Southwest.

Maybe owing to their nonpoisonous nature, the chirping sound that most of them make, or also the typical lizard tail which grows back when broken, they sometimes symbolize the ability of life to regenerate. The process of losing its tail is called autotomy.

An everlasting sign, the enduring Gecko, continues to adorn tattoo lovers. When you have a gecko lizard tattooed over your skin, you are going to display an incredible wealth of symbolism inherent to these little creatures.

Innocuous as it may seem, the striking reptile is no less astounding than any of the bigger beasts which inspire awe worldwide. The most famous feature of the Gecko is the way it leaves behind its tail in order to distract predators. Also, more fascinating is that it re-grows a new tail later on. It is an indication of amazing resilience, the aptitude to not simply survive, but also to overcome adversities.

Those that decide to showcase this creature are favoring the display of determination and grit, which usually outclass physical power.

The regenerative ability of geckos makes them the symbol of renewal and self-protection. There is an abundant appeal to representing the understanding of continuous personal growth.

They are quick in body and mind and exemplify fantastic instincts, as well as great perceptiveness. Some cultures in the world even believe that these lizards are a sign of good luck. Other symbolism that this creature carries is agility and cunningness.

To have one casually making its home across your skin is an overall sign of luck, endurance, and intelligence. You should see the remarkable gecko tattoos with news eyes and take them into consideration for your next tattoo.

Gecko lizard tattoos may come in different designs and variations. They may be in popular art styles like tribal art and Celtic art. Some gecko tattoos come in solid black ink and with Polynesian art too.

With many gecko lizards living around the world, it isn’t a doubt that these reptiles established themselves humans’ lives. In ancient times, the Egyptians and Greeks believed that lizards were signs of wisdom and good fortune. Even nowadays, we use the term ‘lizard brain’ to describe our most primitive instincts, hitting to our evolutionary roots.