Home
Tattoo Meanings
Ocean Tattoo Designs: What Do They Symbolize And Mean? 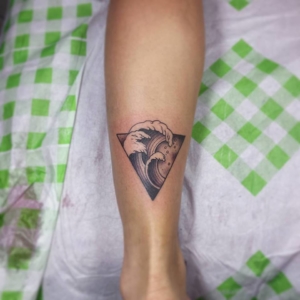 When it comes to life, there is nothing that can survive without water. Every living animal, human, or plant needs it to live. As humans, our bodies are also made up of water. In the tattoo world, it can be very symbolic. The ocean is a body of water that is also of great importance to our planet. That’s why it is commonly present in tattoos.

An ocean is a body of water that composes much of the hydrosphere of a planet. On our planet, an ocean is one of the major conventional divisions of the World Ocean. There are five oceans, which are the Atlantic, Pacific, Indian, Arctic, and Southern.

American English usually uses the word ocean interchangeably with “sea.” Strictly speaking, a sea is also the body of water which land encloses fully or partly. That why “the sea” also refers to the oceans.

Saline water is covering almost 361,000 km2, and it customarily divides into several principal oceans and smaller seas, with the ocean covering almost 71% of the surface of the planet, and 90% of the biosphere of Earth. The ocean contains 97% of the water on our planet. Oceanographers state that less than 5% of the World Ocean was explored. The total volume is almost 1.35 billion cubic kilometers, with an average depth of almost 3,700 meters.

This is the primary component of the hydrosphere of the Earth, it is integral to life. Moreover, it forms part of the carbon cycle and influences weather and climate patterns. The World Ocean is the habitat of about 230,000 known species.

However, because much of it is still not explored, the number of species that exist is much larger. It is possible for over two million. The origin of the oceans on Earth is unknown. Researchers believe that they have formed in the Hadean eon and were the impetus for the emergence of life.

Water covers more than 71% of the surface of our planet. A majority of it is oceans water. This fact actually shows that having this kind of tattoo is quite symbolic as it represents something mighty. The ocean is mysterious and vast, as even with all the technologies that are present in the world, people can just explore a small percentage of it.
There is a common notion that humankind knows something more about the moon than the ocean. People were drawing symbols that represent the ocean and everything that is in it for thousands of years. In the ancient world, there was a common belief that the ocean is definitely endless.

Oceans are ultimately the symbol of dynamic and changing if mostly hidden life. Tattoos that use this subject as the major theme may use any number of aspects. Whether stormy and cold or clear and warm, the ocean is somehow primeval. Moreover, it is the source of life in many mythologies.

Some tattoos are going to portray the ocean as if in a photograph, whit maybe a boat on a journey. Others focus on discovering the underwater life, with various colors and shapes which sea plants and creatures can take. Both types of tattoos speak to a transitory world of the senses, undated with images of life.

Having ocean tattoos can symbolize life or your respect for all forms of life and the water which supports our lives. Ocean tattoos can also be the symbol of mystery. This is as people know little about these waters. There are probably hundreds or more animals and plants whose discovery is about to happen.

Ocean tattoos can also symbolize very immense-like or infinite loving. You can have this tattoo in order to show that you have an unending love for someone. Some people will even use these tattoos to raise awareness. In this way, people can conserve the oceans and all the life in them. This is as several species and plants face extinction.

Having this kind of tattoo may help spread awareness and begin the conservation of the need to conserve the oceans. There are many different ways that you can draw an ocean tattoo. This is because you can have everything from waves to the animals and plants. This versatility is what actually makes this one of the most popular tattoo types.