Home
Blog
Blue Marlin Tattoo: What Does It mean in the Tattoo World?

Hooking a blue marlin is one of the main goals of the sports fisherman. The blue marlin fish has a large dorsal fin, and a spear on the end of its nose. Found all over the world, probably the most well-known is the swift and sometimes high-flying blue marlin.

The blue marlin may be one of the most picturesque of the large game fish, with its deep blue color but an underside hue of silver with light vertical stripes, and it can reach a weight of 1,000 pounds. 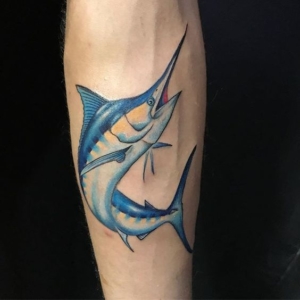 A tattoo of a blue marlin may draw upon the tenacious fighting ability of these giant fish for its symbolism, and it might just as likely serve as a trophy for the fisherman that manages to land one.

However, the blue marlin tattoos are a relatively rare sight and are only common among those people that are addicted to the thrill of the deep sea hunt. More often than not, you are going to find this emblem as a proud badge of honor, which symbolizes that you have conquered a formidable foe. In general, used in tattoo art, blue marlins usually represent the following:

Blue marlins are usually uncommon subject for body art, but for a select few, this is a fish considered an emblem of maritime pride. In tattoo art, blue marlins are usually depicted in a position of power and images of marlins that leap out of the water, dueling with each other, or silhouetted against a setting sun, which are the most popular pieces of the series.