The killer whale tattoo or orca whale tattoo is a group of tattoo designs that people get either because they love the look of the whale or because there are so many significant meanings attached to this mammal. Only seeing their fresh and unique look is probably enough to make you understand why these tattoos are so popular, but those who do end up getting these designs often have more profound reasons. No matter what are the reasons behind choosing the orca whale tattoo that’s still designed with deep symbolism and history.

Orca whales are apex predators, which means that there isn’t a fish in the ocean that dares to try and hunt them. This is the reason why the killer whale tattoo can represent royalty. Sometimes people will make this meaning clearer by adding in other royalty symbols, such as crowns or staff. You can even make this meaning clear by merely putting your orca whale next to some smaller fish and mammals.

Interestingly, killer whales are not whales; they’re a type of dolphin. Those who want to get dolphin tattoos could include a killer whale in their designs to show that they love every dolphin found in the ocean. This is an especially good idea for anyone who loves the sea and simply wants to get a sizeable oceanic portrait on their skin.

Motherhood is one of the most common orca whale tattoo meanings. The reason for this is because female orcas, not the males, are the leaders of their families. You can use this meaning to show that you are a proud mother, or you can even get an orca tattoo to honor your mother. Although this meaning might not be obvious, so if you do want others to know what it represents, you could include other symbols of motherhood around the killer whale design. 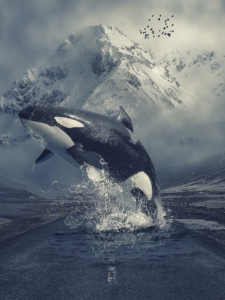 People who consider themselves as being great communicators might find the killer whale tattoo to be the perfect design for them. These impressive mammals express themselves through an extensive list of sounds that all of their fellow whales can understand, and they also can understand each other through their body movements. This is the meaning you’ll want to use if one of your top traits is the ability to easily make your feelings known when you talk to people.

Killer whales are also considered as extremely social creatures as you will very rarely find one-off by itself in the wild. Social people are often quite proud of that quality, so it’s no surprise that this is an ordinary meaning used by people who end up getting killer whale tattoos. You can make this meaning clearer by putting three or four orcas in your design, though you can use the same meaning even in designs that only have one whale included.

Another significant killer whale tattoo meaning is teamwork since these creatures are always working together when they’re on the hunt. This is an excellent meaning to use if you are an athlete or if you find great value in working together to achieve common goals. Again, you don’t have to tweak an orca tattoo to use this meaning, though it can help to show multiple orcas working together on something in your tattoo.

Intelligence is another excellent meaning that stands behind the killer whale tattoo. As we pointed out above, orcas are constant commutates, and they aren’t the type of creatures that have to repeat themselves to be heard. This shared intelligence is the main reason why these creatures have been around so long and why they continue to thrive despite being so large. If you were looking for a perfect symbol of intelligence or cleverness, you should know that there is no better one than the killer whale.

Even though their name implies the opposite, killer whales are incredibly peaceful creatures. There are a lot of other tattoos out there that symbolize peace, but that makes the killer whale tattoo a bit more intriguing since people rarely think of these mammals when they are trying to come up with a peace tattoo to get. A killer whale can also be incorporated into a larger piece of tattoo design.

When we talk about the design of the Orca whale tattoo, people interested in this tattoo really can go in any direction with your use of any of the meanings listed above. For instance, you can have one orca swimming across your body, or you might even opt to get two or three of these whales working together. Moreover, you have the option to get your orca tattoo in all-black ink rather than using its natural colors. Some people will add in some water in the background, so it looks like their whales are swimming, but they can also look great without the water. These are some things that you need to take into consideration before you start having your orca tattoo drawn up for you.

You can place a killer whale tattoo pretty much anywhere on your body, but in most cases, you will want to put it in a way that shows off its entire form. They work exceptionally well as forearm and shoulder tattoos, especially if you are only planning on getting one whale in the design. They can also look great on the back for those who are trying to get larger killer whale tattoos. It comes down to personal tastes since you won’t lose or gain any meaning regardless of where your tat is placed.

The truth is that just about anyone can get one of these killer whale tattoos since most of us can come up with at least one meaning that makes sense for our personalities. Their look on the skin is marvelous, they have symbolism that stretches across the spectrum and, best of all, and these are the types of tattoos that people very rarely end up regretting.