Long before humanity even started to fathom taming the sea, there were some stories about dolphins guiding persons stranded on the lonesome waves. 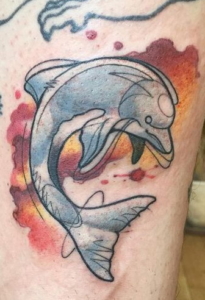 For example, for the ancient Greeks, the dolphins were the symbol of both the divine and the wisdom. Apollo himself, at times, took the form of a dolphin. There is no doubt that the occasional interaction which takes place between human beings and these mammals contributed to the depiction of men riding dolphins in Greek art.

Cretans believed that the dead withdrew to the ends of the planet Earth and that dolphins carried them there.

For marines around the world, the dolphin has been seen as a protector, as well as guide, again probably owing to accounts of dolphins attacking sharks to protect sailors that had fallen overload, plus their tendency to play in the wake of the bow of the ship.

Sailors recount countless encounters with dolphins swimming around them, and the ancient Greeks deemed them to be the sign of a pleasant voyage. Dolphins were also said to bring messages, as well as blessings from the sea nymphs and were the off-springs of Amphitrite, the sea goddess in Greek mythology.

The omnipresent smile of dolphins makes the ones that encounter these majestic creatures feel a profound connection to these wild animals. They are the ultimate free spirits and highly social creatures; they also display a level of camaraderie and unity, which is rarely seen in the animal kingdom.

These wonderful animals are used in tattoo art too. Here, we will present to you the dolphin tattoo, as well as their meaning and symbolism.

It is quite uncommon to see dolphin tattoos, which repeat, creating armbands or anklets.

Dolphin tattoos are definitely among the most popular singular tattoo a female is likely to get. However, they are common among males too. People simply love these creatures, so it is not a wonder if you have ever given any thought or observation of their interaction with humans. They want to be our friends. There are stories of dolphins rescuing humans around. The dolphins were illustrated throughout written history as a restricted image and symbol, and it continues to be today.

Dolphin tattoos make a statement that is unique. They are quite popular and have a few meanings and types of symbolism surrounding them. The main thing which people think of when dolphin tattoo designs come to mind is freedom.

Dolphins are believed to be creatures that are full of free spirit, as well as happiness that enjoy having fun. Such qualities are something that a lot of people want to convey with their body art. Moreover, they are great for people that are connected by their love of the beaches, as well as oceans.

Your dolphin tattoo design may come in a lot of different colors and styles. A lot of people opt to have some other designs added to their dolphin tattoo, like flowers and tribal art designs.

Dolphin tattoos can be associated with a lot of different meanings. Such meanings can come from the character of dolphins, as well as from myths and stories about these animals.

If you are thinking about getting a dolphin tattoo, take a look at its meanings first:

Dolphin tattoos represent a lot of different meanings for different people, beliefs, and cultures. Christian symbolism conveyed this beautiful animal as an aspect of Christ and believed that dolphins transported the spirits of the faithful to Christ’s side upon separation of their physical bodies, hence in Christianity. Dolphin tattoos are represented as a new life.

Dolphin design tattoos are more popular and favorite among women that love to get them done in either small or also large designs. The size of the tattoo is a personal thing, and it depends upon the statement you want to make and whether or not you want it to be a private piece of art or something which is to be shown off. A lot of people decide to put them on the side of their ankles, or the top of their foot, the inner part of the wrist, or the lower back, and the shoulder blade.

There are dolphin tattoo designs for every personality type. There is no limit to the number of ways people choose to depict these loveable creatures. They are drawn in different colors, sizes, and shapes, and with a plethora of motifs. The meaning of each motif will depend on the elements which were incorporated in the tattoo design.

Regardless of the variation you choose, dolphin tattoos will be an excellent way to show off your playful nature and let the world know who you are and what you care about.