Animals are the companions, workers, ears and eyes, and the food of human beings. Also, they are very common in the modern tattooing world. We have domesticated some of them, while others remain wild. Sometimes, these wild animals like the otter are in danger because of our activities.

Animals keep us company, and while they can provide comic relief, they also serve us as our valuable assistants. Unlike the performance of special tasks, the value of an animal as a companion might be harder to measure. With human association, and with their domestication, animals became objects of affection and even worship. 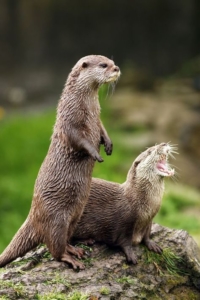 Just like we already mentioned, animals are present everywhere and in everything in our everyday life. They are very common in tattoo trends nowadays too. Animal tattoos are almost always present among animal lovers. Different animals have different meanings and symbolism in different tattoo designs.

Here, we are going to talk about one such animal, which is the otter. The sea otter is a cute, fastidious and energetic animal that has a plethora of meanings and symbolism.

Otters are carnivorous mammals. They have their diets mostly based on invertebrates and fish. This family includes honey badgers, badgers, minks, martens, wolverines, and polecats.

Otters are small, engaging creatures overflowing with positive energies. Bright and intelligent, they are also popular, and eminently lovable. They display the highly developed social skills which characterize these small carnivores. Otters mix easily with other different animal personalities.

Life has a lot of diversions for the otter that is almost impossible to predict how it will fill its day. However, when an otter focuses on a problem, its intelligence rises to the challenge. Then, the otter will not give up until it cracks the nut.

Otters usually feel entitled to the good things happening in life. A general sense of well-being also gives them the confidence to not have to save for the future. The lovers that want to impress an otter have to know that this wild animal loves to eat out.

Even though witty and intelligent, otters tend to suffer from fear of failure and self-doubt. This can prevent them from living up to their true potential. Still, they are excellent problem solvers. They have the ability to spend a great time on practical or abstract challenges. As workers, otters are capable and dedicated. They are always eager for a chance to prove themselves.

Just like we already mentioned, people see the otter as a cute, fastidious, and energetic animal. This animal dines on shellfish while floating on its back. For us, the otter became the symbol of the very properties that it can sometimes exhibit. Such properties are inquisitiveness, friendliness, and intelligence.

In ancient times, people revered them for their ability to dive below the surface of the water. They used their pelts in initiation societies in different parts of the world, from Africa to North America. As their pelts became so desirable in more recent times, this animal also became the symbol of endangered species. Also, it symbolizes the movement to protect and preserve endangered wildlife.

Usually, the otter is the symbol of both Earth and water. This is a very curious combination, because earth is famous for its strength and stability, while water is famous for being changeable and adjustable. The otter embodies both of these qualities very well.

The water in which the otter lives is the symbol of life. It symbolizes the revitalizing energies of life and the paralyzing problems that it can pose. It is actually both bad and good. The otter, which is a playful creature, is the symbol of stability, an island in these rushing streams of life.

Otter tattoos, just like other wild animal tattoos, have their specific meaning and symbolism for tattoo lovers. The most common ones related to this tattoo design are:

Other things that otter tattoos can symbolize are family, wisdom, hard work, and imagination. The otter is definitely the sublimely picture perfect symbol of enjoyment. Otter tattoos can also symbolize play and relaxation, along with the spirit of adventure.

The energies of this animal are strong in the spring, summer, and fall. This is because it spends a very long time in the water. The otter is also a creature always up for a bit of adventure, letting curiosity directs it. Otters don’t worry about what is left behind. They rather look forward and only forward.

Fearlessness is another great attribute of this animal. Otters don’t have a lot of enemies in the wild, which might also augur that sense of self-security. This creature is not just fearless, but it is also ferocious when it comes to protecting its family and territory.

Otter tattoos are definitely perfect for people who love animals, and animal symbolism. If you are one of those people, and you plan to get a tattoo, don’t think twice.