We are free to say that water is the most essential thing in the world since 71% of the Earth is made of water. Besides, about 60% of the human body is comprised of water. Every living thing on this Earth can’t live without it. Water is a force of nature. It has the ability to create or destroy. A Tsunami can wipe out an entire island, and the flow of water can erode mountains. At the same time, a small drop of water can nourish a small plant and gently guide it into this world. Water can fit into most spaces and can adapt to any situation. This goes to show you the importance of water in our lives. Because it is so important, it doesn’t surprise us that so many people get water tattooed on their bodies in some way or another. Another thing about the water tattoo is the fact that it comes in many forms that we will never be short of options when looking to get our design.

When speaking of water in general terms, the symbolism goes as deep as the sea. From mystery and wonder to intuition and magic, water has a whole range of meanings that will depend on what image you choose. For instance, it is a symbol of fertility and purity. Water is often viewed as life itself. This idea goes back in the past when you recount numerous myths where life emerges from the water.

Water holds great symbolism within a religious context as well. In Christianity, water sometimes symbolizes the cleansing of a spiritual nature that might come when you accept Christ in your life. Consider the idea of being baptized. Your sins are wiped clean with the water, and you start fresh in Christ’s eyes.

In Buddhism, water is supposed to symbolize calmness in us. It also represents clarity and purity. It is imperative for those that follow the Buddhist religion to be in harmony with nature.

In Judaism, water plays an essential cleansing role. Judaism was addressing environmental issues far before the rest of the world was. They understood it was a human concern and not just a specific area. According to the perspective of the Talmud on the environment, even though we use everything on this Earth for our needs, we should never recklessly destroy or damage our environment.

In Islam religion, water is considered to be a gift from God, and it is a symbol of life. Because of this, water should never be sold or purchased. Due to their awareness of the importance of water, Islam prohibits the pollution, spillage, and monopolization of water. 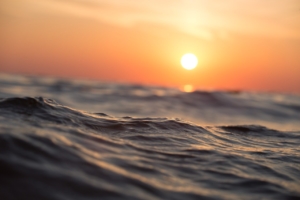 Water as an element is used for creating unique designs. The meanings of the designs vary depending on the cultural significance of the image, along with the image itself. There are a vast number of water images and many ones to choose from for a tattoo design, but below are some popular ways how water is tattooed.

Water is used in almost all forms of Japanese tattooing or Irezumi. Not only is there a great deal of symbolism, but it is a great filler as well. In Japanese culture, water represents the simplicity and purity of life. In the indigenous religion of Shintoism, water is considered to be a primary force and is sacred for them. This is the reason why no matter what symbol you see in Japanese tattooing, you are bound to see some water in there.

Water can be either calm, or it can be angry. When getting a tattoo of a wave crashing down, you might be dealing with overwhelming emotions that might drown you if you don’t deal with it. However, the wave isn’t always a thing to worry about for the wearer of this tattoo. The wave tattoo can also symbolize a specific moment or place in your life. It might also express love for water or surfing. The idea behind the wave tattoo is to represent the power of water.

The river, just like many water-themed tattoos, represents us with the power of water. It also shows us the flow of the river and the way the water follows that path and moves around anything in its path. A river tattoo is a perfect way to get across the idea of moving forward. It also represents “going with the flow.” The idea behind this tattoo design is that there are many transitions in life, and you shouldn’t run from these. You were meant to go through them, so the river tattoo serves as a great reminder to just go with the current, and if you do, you are bound to come out the other side as a changed person.