If you are searching for a tattoo design that is popular all over the world, then you should take into consideration the peace symbol tattoo. This tattoo ranks among the top designs around the globe. 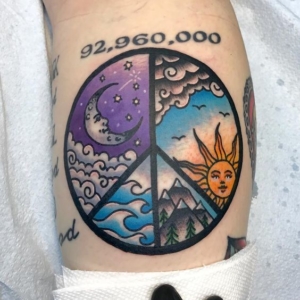 People from everywhere used peace signs for a long time, in order to represent peace and tranquility. Moreover, they have marketed these signs through stickers, T-shirts, key chains, posters, and jewelry. The peace symbol remains to be a reminder of the 1960s and 1970s.

A lot of peace symbols were used in a lot of different cultures and contexts. For instance, early Christians symbolically used the dove and olive branch. After that, it eventually became a secular peace symbol that Pablo Picasso popularized after the Second World War. In the 1950s, the peace sign, as we know it today, appeared.

This peace symbol started as a British anti-nuclear logo in 1958. While some sources claim that Lord Bertrand Russell designed it, others claim that he commissioned it, but J. Holtom designed it. Even though it resembles certain runes, we don’t really know the source of its inspiration.

In keeping with its anti-nuclear origins, this symbol was historically closely connected with different protests and movements. However, it has spread around the world to such an extent that it has become a benign and generic symbol for peace.

The symbol that we now internationally known as the peace symbol or peace sign, or also the nuclear disarmament symbol, or the CND symbol (Campaign for Nuclear Disarmament) originates as a symbol that represents the threat of nuclear annihilation.

It was used in British anti-nuclear activism from 1958. The US American anti-war movement widely accepted it in the 1960s. Then, it was re-interpreted as generically representing world peace. However, activists opposing nuclear power still used it in its original anti-nuclear context, during the 1980s.

Despite that, it is a widely known world peace emblem the peace symbol has a lot of other uses. The 1960s and 1970s were very hard times of war and antiwar supporters. These supporters constantly used the peace symbol during demonstrations. Moreover, some phrases such as “make love not war” first appeared during this period.

Because of its wide use all over the world, this symbol has become part of the tattooing world. Many people who actually experienced or lived in the hippie culture, get peace symbol tattoos. If you are thinking about getting a tattoo, possibly you have to consider the peace symbol designs.

Many people who lived through the culture choose this tattoo design as they feel a very strong connection with it. Most of these people say that this era was the greatest period of their lives for sure. Peace symbol tattoos form a better connection to these great memories and moments.

There are actually many different meanings associated with this tattoo design. All tattoo symbols have specific and symbolic meaning in one way or another. Even though the peace symbol tattoo is favorite because of its symbolism, some people choose it simply because they like it.

With saying this, here are the meanings that are usually common for this tattoo design:

Just like we all know, the peace symbol tattoo most commonly symbolizes peace. Moreover, you can wear it in order to symbolize the hippie culture. Some people see this symbol as one of harmony and faith. However, your peace sign tattoo may represent any of the meanings we already listed. In the end, remember that it will represent everything that you want it to.

You can do this tattoo design in many different variations. The traditional variation includes a three-pronged symbol facing downward, and a circle surrounds it. This is the famous traditional peace symbols. Moreover, it is the most common one, but designs are starting to change. This happens because tattoo artists start demonstrating their own creativity in such traditional designs.

Some peace sign tattoos may be done as tribal or Celtic tattoo designs as well. However, before you make a final choice, remember to look through the different variations this design has. Also, both men and women wear this tattoo design. As this symbol is so diverse, there is definitely no preference between both genders.

One difference that is common between them is color choice in the tattoo design, but it is a minor difference. Women usually choose softer colors like purple and pink. Men often tend to stay away from those two colors, but not all of them. Both genders choose tattoo designs that are quite colorful and include different types of colors. However, there are designs that are present only in single colors.

Remember that this all depends on you and your taste for tattoos. If you are a great tattoo lover, you will definitely make the right color choice. Moreover, this famous world peace emblem will definitely be for you if you are a peaceful person. After all, it is your own choice, so be careful in making the decision.