Home
Tattoo Meanings
Olive Branch Tattoos: What Do They Symbolize Among Tattoo Lovers?

For those people who are peaceful and spiritual, and want to express that by inking their skin, an olive branch tattoo will be excellent for them.

For thousands or more years, the olive tree was the symbol of victory, peace, happiness, and wisdom. Being witness to a lot of biblical events, many cultures consider the olive tree sacred. 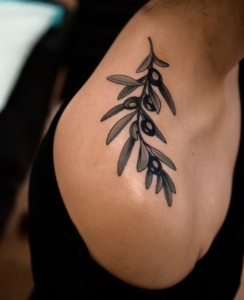 With its leaves always green and with its extraordinary longevity, this tree embodies immortality. The branches are a symbol of prosperity and peace. Many champions of sports competitions and winners of bloody battles received olive branches as awards. Virgins and brides were also wearing them.

In the Bible, the dove that returned to Noah carrying a green branch symbolizes a new beginning and hope. This motif is historically the symbol of peace. This is not just for the Hebrew people but for the ancient Greeks and Muslims as well. However, in modern times, a dove holding an olive branch still finds its use as a peace symbol.

Nowadays, these tattoos are getting more and more attention. People seem to really like them for many reasons. Some of the reasons are the shape, delicacy, and symbolism of the design. Moreover, they are one of the most beautiful minimalist types of tattoos. So, if you are seriously thinking about getting a tattoo of an olive branch, keep reading.

Olive branch tattoos are one of those tattoo designs which bring attractiveness to it. A lot of people know that to offer an olive branch means to stop an argument and bring peace. However, there is even more to this tattoo than that.

In the ancient wars, the Greeks were putting these branches on banners, artwork, as well as statues. They did so in order to represent their success in battles. So, you could get your branch tattoo in order to symbolize your Greek origins. Also, you could get it as a military tattoo. In neither case, you don’t have to add any additional imagery to the tattoo. However, you could include a Greek banner or also a flag if you are honoring your Greek ancestry.

The olive branch is actually the classic symbol of reconciliation. Because of this, some people get it to show that they are the types to let bygones be bygones and move on with their lives. For those people who used to let things get to them but are now determined to let things go a bit easier, this tattoo will be excellent.

Similarly, this tattoo can even represent peace in its different forms. If you want more peace all over the world, this will be an excellent tattoo for you. The olive branch is even excellent design for those people who once had chaotic lives, but now want to bring more peace into them.

The olive branch tattoo will represent clarity as well. Clarity is the skill that we should all celebrate. That’s why people often put these olive branch tattoos where everyone can see them. This tattoo design is also sometimes present as a matching tattoo. When two individuals get olive branches, it will show that they love each other and that no one can break their special bond. Unlike a lot of matching tattoos, the olive branch isn’t split up between the two designs. It is, in fact, a matched line for line on both bodies.

There are various symbols of chastity and purity. However, the olive branch gives people a unique way to show their pride in these qualities. Usually, this is a personal meaning.

For an unbelievably charming dose of symbolic influence, there is nothing better than an olive branch tattoo. These ornamental displays are full of historical and spiritual significance. Olive branch tattoos are captivating vessels of everlasting insight and clarity.

Ancient Greeks used the symbol as a benevolent representation of victory. This is directly leading to the connotations of tranquility and peace. This society even regarded it as a connection to purity. That is why virgins frequently donned it. Also though it is a rarity, some recipients of the olive branch tattoo now use the emblem as a lifelong vow of abstinence.

Brides were also wearing these adornments during their wedding. Then, guys can lovingly acquire an olive branch illustration as a proud commemoration of an enduring partnership. There, it served as a sentimental reminder of the humble beginnings of married couples.

Greek mythology attributes a huge value to the olive branch. Its effect stems from an infamous encounter between Athena and Poseidon. In the meantime, some of the earliest Christian art pieces also use it. Here, it is the enchanting metaphor for the Holy Spirit.

The key would be to find even one meaning that truly defines who you are as a person. It will be something that you are proud to call a personal trait.