Have you ever been searching for a symbol to have tattooed on your body that has a considerable amount of meaning behind, but at the same time, it is a small image? This is a challenging quest. The reason for this is because there are a lot of symbols out there. The hardest part isn’t finding something small that has a lot of meaning, but more the idea of having to choose one that best fits with the symbolism you want to portray. A lot of tattoo designs hold a great deal of meaning, but before you get one, you should decide what you want to be represented on your body. One of these small images with a lot of symbolism behind it is the tattoo of a pinky promise. Most often, the pinky promise tattoo design depicts two hands with pinkies extended out either touching each other or wrapped around each other.

The more significant part of people doesn’t need an explanation of what it looks like because we have been making pinky promises with our friends since we were little. However, the symbolism behind the tattoo could be slightly different than you imagine.

Origins of the Pink Promise

Most often, everything depends on the friends making the oath, but an oath is an oath, and this oath does have some value. If more people were familiar with the origins of the pinky promise, they might take it a bit more seriously.

It is believed that the idea and the design originate from Japan and has been around the United States since around the 1860s when it had been talked about in Bartlett’s Dictionary of Americanisms. Here, the pinky promise was mentioned in this context: “Pinky, Pinky, bow-bell. Whoever tells a lie will sink to a bad place and never rise again.”

This probably seems like a pretty serious punishment for breaking a promise, but it gets harsher in Japanese culture. In Japan, the pinky promise is known as “yubikiri,” which, when translated, means “cut off a finger.” The Japanese mafia or Yakuza use this, and this is a kind of punishment that is far more rigid than any of us would hope to face. According to this promise, if you made a pinky promise and didn’t follow through or broke your oath, you were predisposed to lose a finger for it. Moreover, the person that was wronged in the promise would be permitted to cut off the Pinky of the person that broke the promise.

That is a harsh punishment, especially for most of us who were making pinky promises ever since we were children. Luckily, the majority of us don’t follow through with that part of the promise these days. However, it proves to us that the pinky promise was considered as a highly serious promise that you were making. 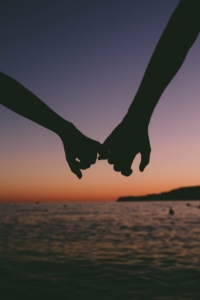 This tattoo is a perfect choice as a matching tattoo that made a promise at each other. Moreover, it can be a great choice for lovers as well. This is a promise to be true to each other and never hurt each other. When you get this tattoo to honor a specific friendship or a marriage, this tattoo design symbolizes loyalty to one another.

The pinky promise tattoo is also used to represent a kind of honor that a person has. To make a promise and keep it is an honorable thing to do, and there are a small number of people who are strong enough to keep their promise through thick and thin. It this sense, the tattoo symbolizes mental fortitude as to keep a promise, you might have to stand up to forces that want you to break that promise.

An additional meaning that can be attached to a pinky promise tattoo is as a memorial or memory of someone. We used the pinky promise when we were kids. Back at that time, it meant something, and it was something we swore we would maintain. At times we lose friends along the way, and we know of a few cases where people are keeping that childhood memory alive by getting the pinky promise tattoo. From time to time, it’s the smallest things that have the biggest memories attached to them, and this image is no different.

This kind of design is the most common way you will see the pinky promise tattoo. This tattoo design consists of an image of two hands wrapping pinkies, just like you would do it with a friend or loved one. Some many symbols and images can be combined in this tattoo to support the idea, but this one is simple and small but full of meaning.

This design is a creative and unique way of getting the pinky promise tattoo. Sometimes, you can see someone with the word “promise” tattooed on the inside of their Pinky. It is a clever way to get this tattoo, and it is less common than the simple version previously mentioned. This is a perfect choice because it can easily be hidden as well, so if you don’t want it to be noticeable.

Among all the weapons used by the Vikings,