The Roman system relies on the addition of letters, each assigned a value, to produce larger numerals. In truth, you can use Roman numerals to symbolize any type of numbers, such as a date or a time that is important to you. Some people will even use Roman numerals to symbolize letters and will “spell” out a quote or a person’s name with the symbols.

With the advance of Roman numerals due to the ancient requirements such as trade and mercantilism, there is no symbol for ‘0’. These numerals were used to stand for something, and so zero was not required. However, factors of 10 are presented in Roman numerals, so entirely any other number can be used when getting a Roman numeral tattoo.

Roman numerals are nowadays used in situations where admiration or self-respect is due. They signify significance, lending what they stand for to symbolize a superior quality of the well-established ancient culture. While many people will add more modern meanings to their Roman numeral tattoos, it is not rare for someone to get one to hold more classic meanings. For instance, you could get a Roman numeral tattoo to represent an important date in the past, such as a grandparent’s birthdates.

Frequently, these numerals are used to indicate a longstanding tradition, such as the lineage of monarchies (Henry VII, VIII, etc.) or sports traditions like the Super Bowl. A huge football fan can get the Super Bowl number from when their beloved team won the big game. In those instances, the owner will typically add a helmet or some other image to make the meaning a bit brighter.

The task of Roman numerals to visually represent a date of individual significance lends that event durability and a sense of establishment. This is frequently used to symbolize a year of birth, either one’s own or the birth of year of a loved one. The date could also hold an entirely diverse meaning, such as the day that somebody entered prison. People can use these dates as a reminder of a good time or a bad time, but it is always a date that they don’t want to forget.

The Roman numeral design gives a sense of upper class, admiration, and a demand for respect. These are some of the chief reasons why so many people are fascinated by Roman numeral tattoos nowadays. They know that despite the meaning that they give to their tattoos, they will come across as relevant to outside observers.

Apart from how they are used, Roman numerals express the importance and the authenticity of the tradition. The numbers portray a date of establishment, a foundation on which a legacy is meant to be built. This makes these simple symbols hold a deeper meaning than most other tattoo designs. They can hold several purposes, but in many cases, they have one very unique meaning to the owners.

The most important thing about the Roman numeral tattoo is the decision about what it will represent. The majority of things you will see have to do with a number as the roman numerals standing for numbers. There are different ways you can get this tattoo, and it can be related to different images to change up the meaning.

Most often, people decide to get a Roman numeral tattoo to represent the birth date. You can get your birthday or a loved one’s birthdates that you want to keep forever. The children’s’ birthdates being tattooed in roman numerals is a very popular tattoo.

Some of the most popular clocks on the planet are chock-full of roman numerals. For instance, Big Ben, which is in the Palace of Westminster Clock tower, uses Roman numerals as numerical indicators. This is almost certainly the most popular clock in the world, and it is where the Houses of Parliament for the United Kingdom are located. Much older looking, grandfather(ish) clocks use roman numerals. It is a symbol of verbalization. 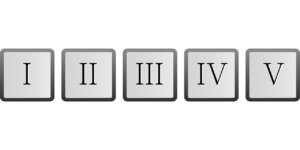 Very often, Roman warrior tattoo is combined with the roman numerals in a tattoo design. The numerals can be a historical date. They could when a significant battle happened, or it could even be many dead soldiers or kills. This tattoo allows you to be creative.

Roman numeral tattoos are extremely significant even if they don’t always hold clear or deep meanings. These are the types of tattoos that can come in any shape and size, making them appropriate design choices. There are a huge number of people who choose to get the Roman numerals by themselves, but this is also a great tattoo to get in combination with another image to add a bit more meaning.