The Hannya mask is a customary Japanese ornament used in Noh theatrical performances, kyogen theatre, and Shinto kagura dances. It is a symbol of a jealous woman driven mad and transformed into a horrifying demon. In a way, she is like Medusa, but she has her back-story, and its roots are very much in Japanese culture.

About the Hannya Mask Tattoo

The reason why the Hannya mask is so popular in the world of tattoos is its great look. Usually, this is a larger tattoo, but it is also possible to get a smaller Hannya mask with other designs surrounding it. For some people, this is a pretty scary image, while for others, it’s simply beautiful. Either way, it’s a strong and powerful image that has several different meanings. The meaning of this tattoo depends on who the owners are and the type of Hannya mask tattoo that they decide to get.

The mask consists of two spiky pointed horns, serious, mournful eyes, and a wide, screaming mouth. Frequently, there are sharp teeth as well, that adds to the horror. The image is typically meant to scare and horrify, causing the audience to fear the anger and jealousy of the tortured demon woman. A person who gets a Hannya mask tattoo might be trying to get admiration from the people who see it, or they know that the image symbolizes some part of them.

Three degrees of Hannya masks serve as a representation of the fall of a tormented woman into the insanity of envy and compulsive behavior. The first type of mask is the brightest colored and the furthest away from the actual demon. The horns are minor and less frightening but still inhuman. People who choose to get this Hannya mask image are generally suggesting that they are still normal at that point, but there are danger and chaos that is a treat for this state. This version of the tattoo is a perfect choice for a person who has anxiety or deep rage issues.

The second mask is darker, including a deeper red that represents a woman on the edge of becoming a demon overtaken by her jealousy due to unreturned love. A character who has gone through a very complicated relationship and is having a rough time with it might decide to get this type of Hannya mask. It could also be a tattoo for a woman who has been cheated and still has difficulty overcoming that.

The third mask includes a vibrant red and portrays an actual demon, a tortured and furious soul that is highly impulsive. The demons cause a great fear because of their sharp, longhorns, and teeth. Their extreme misery is the reason for their murderous and cruel actions. This is the most popular Hannya mask tattoo that is chosen even by those people who are not crazy in any way. This is an iconic image that can be a larger tattoo on its own or combined with other tattoo designs.

The Hannya mask combined with cherry blossom design is a very popular combination used in one tattoo. The cherry blossom serves as a symbol of life being beautiful but very short at the same time. This comes from the fact that cherry blossoms are particularly appealing but die fast. Even though this combination doesn’t make sense, it can be a perfect way to help you understand that you don’t have time to spend your life filled with jealousy. 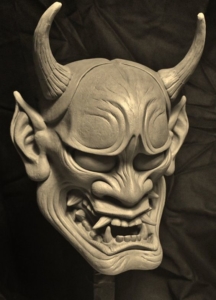 The Japanese snake is the symbol of the divine feminine or attributes of the female that might be holy. This represents a perfect fit with the duality of the female. This combination stands for the jealous and impulsive side of the woman versus the beautiful feminine part of a woman. This tattoo is a striking image of the different spirits of a woman and seems to be a popular choice for Japanese tattoos enthusiasts.

When the Hannya mask tattoo is combined with a wave tattoo, it creates a symbol of the backflows of life in all its shapes and forms. This is even associated with women and the feelings of jealousy.

The Hannya mask tattoo belongs to the group of tattoos that doesn’t need multiple meanings to be considered as a fantastic choice. It’s the type of design that many people would love to have since it looks excellent in both colorful and black and gray ink. Even though it’s a bit sinister to look at first, at the same time, it can also hold a mighty meaning for its owner and can be further adapted to work with their tastes.