Spirituality is something that is not only attained by reading religious texts or following the preaching of different religions. It can also be attained by getting chakra symbols tattooed on the body. For a very long time, the chakra symbols have been considered as symbols of different attributes of the mind, body, and spirit. There is an actual theory behind the power of the chakras. This theory proves that when a certain energy center, or chakra, is focused upon with enough energy, the mind is capable of triggering heal and growth.

This energy center is known as Sanskrit, which is a word for a wheel, and there are different circular centers of energy throughout the body that match your physical nervous system. Many people include one or more of the nerve centers into the design of their chakra tattoos, and each has a very separate and special meaning. There are different chakra symbols with their special meaning that can be used as a tattoo design, but the seven main ones are the most popular.

The origin of the Chakra tattoos

Besides the fact that there are lots of stories and theories related to the birth or origin of chakra tattoos, there are conflicting accounts of the history behind the seven main symbols. According to one research, the chakras are of Indian origin, and it was in the period between 1500 and 500 BC that people started to get these symbols as tattoo designs. 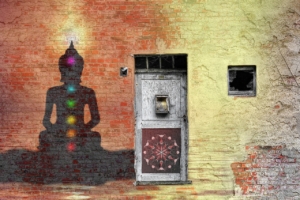 There is evidence that proves that the early period is of chakra tattoos is found in Shandilya Upanishad and Yogashikha Upanishad.

There are also some early historians and chakra scholars, who claim that any existing knowledge on chakras was unwritten. It was much later that some authors of the new age gave chakras some symbols and published them.

According to another account, the seven chakras originated from East Africa or modern-day Tanzania, to be more precise. The Mount Meru in Tanzania, according to some scholars, is considered to be a holy mountain that stands for the journey of life, starting from the bottom and to the top. This proves that chakra tattoos have certainly come a long way, so decoding them is so much fun.

Meaning of the Seven Chakra symbols used in tattoo designs

Every time you see a tattoo of the chakra symbols, you can notice that the seven ones stand out. This is because these symbols help people draw them on their bodies to gain spiritual and physical energy. This kind of tradition has been present since ancient times. Below are the seven chakras and their meaning in the chakra tattoo designs:

This symbol is also known as Muladhara. When this symbol is used in chakra tattoos, it symbolizes a connection to material security or grounding.

This is a good tattoo design for people who feel that they have achieved the balance of their physical bodies. This symbol also represents a clearing of any fear, or in other words, coming to terms with the senses and knowing that a higher power is in control of things from here.

This symbol is known as Swadhisthana and symbolizes sexual creativity, having the knowledge or primal understanding about their sexuality and being one with that.

This is a very specific chakra symbol because it serves as relief of all tensions, and helps you leave behind the pain of a relationship, the pain of an addiction, or the pain of losing someone you loved. Moreover, it can be used to symbolize moving on and moving towards higher accomplishments.

This symbol is popularly known as the Manipura. The tattoo designs with this chakra symbol are usually worn by those who possess personal power. These individuals have revealed the power from within to be able to heal, rise above obstacles, and focus on the good in the world. After you free yourself from all the anger, the only thing that is left is love, and love can conquer all.

This chakra symbol, known as Anahata, is the symbol that most women relate to since it can symbolize the connection or love to their children, siblings, parents, or the world and everyone who has ever spent time here.

For the majority of people, this unique chakra tattoo represents happiness, harmony, and that unwavering connection to the source. The person with this tattoo lives in a different place, coming from the position of love first, which can change the world.

Vishudha symbol is used to represent a connection or higher communication with the source, promoting the idea of resolutions, and the release of temerity. This chakra symbol is the perfect option for those who have finally found inner peace.

The chakra symbol that is probably the most popularly used as a tattoo design is the Ajna symbol because it can be designed in many creative ways. This symbol stands for a spiritual connection, insight, and visual manifestation that puts someone on higher awareness.

Those individuals wearing this skin art has a wild imagination and belief that there is no pain, no grief, and no struggles in this world.

As you can see, these seven symbols have a very unique and specific meaning that can make some outstanding tattoo designs if you are a person who wants to express the spiritual side through tattoo designs and find these meanings mentioned above something that you can relate to than these symbols are perfect for your tattoo design.