Home
Tattoo Meanings
The Bat – Negative Symbolism In The West And Good Luck In The East.

Let’s face it – the bat is not the most popular animal used in symbolism. It is largely misunderstood, and therefore, its meanings are fear-based.

This is an animal that is often correlated with negative symbolism in the West, but it is also a symbol of good luck, as well as longevity in the Far East. Among the ancient Maya of Central America, the bat has been revered as a type of guardian god.

However, the very savvy Native Americans approached the realm of animals from a position of honor. These people knew all things are connected. They also understood that seeing the bat with fear in the heart would be the same as being terrified of their children. So, ultimately, fearing their family members in nature is utterly ridiculous behavior. 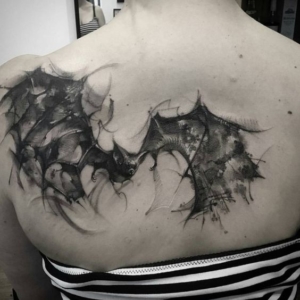 The Native American animal symbolism of the bat comes from a keen observation of this magnificent animal. The natives recognized that the bat was highly sensitive to their surroundings, and because of that, it was considered as a symbol of intuition, as well as dreaming and vision. This also made this animal a powerful symbol for the Native American shamans and medicine people. Usually, the spirit of the bat would be invoked when some special energy was needed, such as “night-sight,” which is the ability to see through illusion or ambiguity, as well as drive straight to the truth of matters.

Nowadays, in the was the majority of tattoo iconography, the bat is synonymous with the dark side of the supernatural. Sometimes, it is represented as a winged demon; sometimes as a blood-sucking vampire, it is simply associated with witches or part of a dark, as well as ominous scene.

There is no doubt that eerie association comes from its dual nature as a nocturnal, as well as winged mammal, active at night, as well as having the ability to make its way in the dark.

Besides the symbolism which we mentioned above, the bat is also a symbol of the following: