A lot of early and primitive people incorporated tattoo art into their societies. This is true of the Native Americans and the people from Hawaiian and Polynesian islands. Native American tattooing refers to the region of the New World, which some people call the Americas or North and South America. The Native Americans would use objects like sharpened bone or rock and carve the tattoo into the flesh. Then, they filled these tattoos with soot or natural dyes to stain in the wound.

This tattooing strikes an interesting combination of both the traditional images which were present before European contact and taking an art historical approach that uses all manner of pre-Columbian art as inspiration for tattoos. 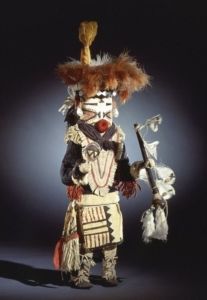 There are many different reasons why these people loved tattoos, and both men and women were undergoing this process. After wars, a lot of men from the winning tribes were receiving tattoos, signifying their victory and conquest.

As a result of their Native American tattoos, there are many popular and different Native American tribes. These tattoos have spiritual and mystical meanings, particularly to the people that wear them. A lot of people believe that the tattoo is going to endow them with supernatural powers and strengths. For example, many of them tattoo the animal whose strength they would like to emulate.

Nowadays, a lot of people are opting to identify themselves with such tattoos and their tribes. This is true for the ones with Native American heritage, but also the ones that simply admire the culture. As tribal art is more prevalent in this modern world, Native American tattoos are usually a popular request.

One such tattoo, which has Native American origins, is the kachina tattoo. In fact, the Pueblo Indian kachina may be one of three things. Those things are the ancestral spirits of their religion, masked dancers, and small carved dolls.

Below, we are going to find out something more about the Pueblo Indian kachina, and its uses in tattoo art.

A kachina is actually a spirit being in the religious beliefs of the Pueblo people. These people are Native American cultures which are specific for the southwestern part of the United States. In the Pueblo culture, the Hopi, Zuni, Hopi-Tewa, and certain Keresan tribes practice kachina rituals. However, kachina rituals are also popular in most Pueblo Tribes in New Mexico.

Moreover, the people who will be responsible for the respectful care and well-being of the doll, like mothers, wives, or sisters, received these dolls.

Just like we already mentioned, the Pueblo Indian kachina may be one of three things. The dancers and the dolls represent the spirits – beings that may be unique to each Pueblo group. Also, there may be several hundreds of these beings, each with its own costume and purpose.

Tattoo artwork which incorporates kachinas shows them in any of their three manifestations. It usually uses a combination of the earthy browns, reds, blacks, yellows, and turquoise popular in the religion’s artwork.

A design that we cannot see every day, the kachina doll tattoos are definitely worth a look. The Kachina doll represents a sacred object among the Native American Hopi people. They carve it from the cottonwood root and elaborately decorate them and use them to educate your women and girls. They educate them about Katsinas. Katsinas are immortal beings that control the environment, bring rain, and act as messengers from this world to the following.

An object of strong symbolism, the kachina doll is of an enormous cultural meaning. That’s why people recently adopted it as a tattoo design too.

To understand the kachina spirit properties, we have to understand the Hopi people first. They were spiritual, creative, and more than anything else, peaceful people. They were excellent craftsmen, artisans, agriculturalists, with abilities to coax corn into growing in their desert homeland.

The Hopi symbolism was also very important. They took their symbols quite seriously, imprinting them on various forms of artwork. Kachina symbols weren’t different, and they were frequently present on pottery and baskets. They were also present as tattoo designs, made into dolls, or used as masks during important ceremonies and rituals.

Remember that before getting this tattoo design, you should be well aware of the meaning standing behind it. That being said, the kachina doll does make a beautiful design and is one you will not see quite frequently.