The centaur is a mythical creature that has the body of a horse and a human torso, attached where the neck of the horse should be. According to Greek mythology, centaurs were creatures that lived in the mountains and the forests, and they could not drink wine without getting drunk and be prone to rape mortal women if they came across them. 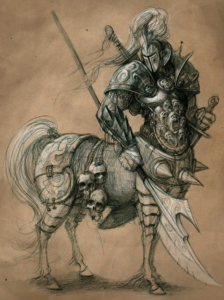 They are also embodiments of discord and tension – the pull between the instinct of nature and the judgment of man. Their legend is believed to have originated as a recollection of the first sightings of nomads on horseback from the steppes of Asia – a frightening sight to the sedentary peoples of the Mediterranean. Centaurs also came to symbolize animalism, untamed nature, as well as lack of self-control.

Centaurs are a paradox, for the first time illustrated physically – half man, half horse. They were also wisdom personified. However, not all centaurs are tempered by wisdom. The original centaurs described in ancient Greek myth were born from one of the sons of Apollo, and Stilbe, who was a mare of Magnesium. These offspring were wild, untamed, as well as utterly primal.

The centaur tattoo is quite unusual, rare, as well as catchy but original, depicting the centaur on the back, chest, shoulder, arms or blades, as well as some other parts of the body. This tattoo can be usually found in people that are born under the sign of Sagittarius, the centaur, releasing an arrow from a bow. It is also the symbol of this zodiac sign.

With the animal instincts, a man’s wisdom is interwoven, which inevitably leads to some deeper conflict between the two opposites. In Christianity, the centaurs were regarded as negative characters, personality heresy, as well as drunkenness and wildlife.

On the other hand, in the Vedic myths, the centaurs were connected with these soldiers, symbolizing courage, strength, bravery, as well as wisdom. Another meaning of the centaur tattoo is an adventure, a thirst for human freedom, independence, as well as the desire to do all that you want, no matter if anyone around you.