The horse is one of the most beautiful, as well as elegant animals in the world. They are an excellent human companion since ancient times.

It is quite hard to think about our history without a horse, as they proved themselves as irreplaceable in many situations. Different nations in the world became known for their horses. They considered this animal as the most precious one.

The horse is one of the two extant subspecies of Equus ferus. It is an odd-toed ungulate mammal that belongs to the taxonomic family Equidae. The horse evolved over the past 45 to 55 million years. It evolved from a small multi-toed creature, Eohippus, into the large, single-toed animal of nowadays. 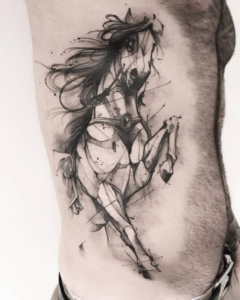 Humans started domesticating somewhere around 4,000 BC, and this practice spread by 3000 BC. The horses from the subspecies caballus are domesticated, even though some domesticated populations live in the wild as feral horses.

These feral populations aren’t true wild horses, as this term describes horses that were never domesticated.

The anatomy of the horses gives them the ability to make use of speed in order to escape predators. They also have a well-developed sense of balance and a strong fight-or-flight response. Horses have the ability to sleep both standing up and lying down, with younger horses sleeping more than the adults. The female horses, known as mares, carry their young for almost 11 months. A young horse, which is called a foal, can stand, as well as run shortly after birth.

In the past, humans couldn’t live without horses, as they helped them in building many towns and farms. As a form of transportation, horses were irreplaceable for hundreds of years. They were always strong and hard-working, and they developed an extraordinary connection with humans.

This is one of the principal reasons why having a horse was always about friendship and not ownership. Because of this, horses also find their uses in tattoo art.

As the backbone of plains tribes in America, and the main vehicles on battlefields, it is safe to say that horses played a huge role in human history. The relationship of humans with horses is an ancient one. The vestiges of their importance may be present in our modern-day language. One such example is cars, which are described in terms of their “horsepower.”

In a symbolic tradition, such as horse paintings in the cave art of the last age, wild horses symbolized power. For example, in the Chinese zodiac, the people who are born in the Year of the Horse are cheerful and perceptive. However, they can also talk too much.

Because of the popularity of these majestic animals, their meanings vary from culture to culture. For example, people that have horse tattoos are often high-spirited and free-willed souls. They are also not easily tamed.

Generally said, horse tattoos have some of the following meanings:

Horse tattoos became quite popular from the 18th century. During that period, the symbol of the horse became popular in the Native American culture. The common uses of horses were usually in hunting and war. Their speed was essential as, during those days, cars were not discovered yet.

People who love tattoos could tattoo a horse, or just a part of it, showing that it is a great asset. This led to the existence of such tattoos, which are nowadays really popular. The nice-looking shape of a horse gives the tattoo a unique look, which makes it a cool tattoo.