Home
Tattoo Meanings
The Masterpiece Of Michelangelo, The Statue Of David, Used In Tattoo Art

Michelangelo di Lodovico Buonarroti Simoni, or better known simply as Michelangelo, was one of the greatest painters. He was as well as one of the greatest sculptors in art history. He is best known for his famous paintings, which adorn the ceiling of the Sistine Chapel, and he also created some famous sculptures like his “David,” “Pieta,” and “Moses.” 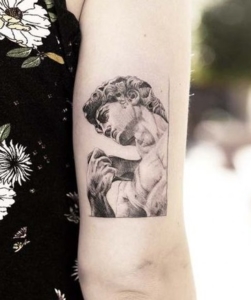 He was born on the 6th of March, 1475, and until now, we would have been 544 years. Considered by a lot of people as the greatest artist of his lifetime, and by some as the greatest artist of all times, his artistic versatility was on such a high order that he is usually considered a contender for the title of the archetypal Renaissance man, together with his rival, the fellow Florentine and client of the Medici, Leonardo da Vinci.

A number of the works of painting, architecture, and sculpture rank among the most famous in existence. His output in this field was also prodigious. Before he turned 30, he sculpted two of his best-known works, “David” and “Pieta.”

The works of Michelangelo were a common inspiration for tattoo artists too. For example, one of them is the Creation of Adam, which is a painting he painted on the ceiling of the Sistine Chapel. The second work of art of Michelangelo, which is often used in tattoo art, is the sculpture of David.

A lot of famous pieces of art find their way into tattoo imagery, including sculptures too. While not all fine art is overtly symbolic, much of it does allude to some great myths and themes.

The fully nude David of Michelangelo, which is a sculpture and one such masterpiece, reproduced and copied in infinite forms, is one inspiration for tattoo art.

David is the masterpiece of Renaissance sculpture, which is created in marble between 1501 and 1504 by the Italian artist Michelangelo. David is a 5.17-meter marble statue of a standing nude male. The statue represents the Biblical hero David, who was a favored subject in the art of Florence.

Originally, this sculpture was commissioned as one of a series of statues of prophets to be positioned together with the roofline of the east end of Florence Cathedral. However, it was placed in a public square, which was outside the Palazzo Vecchio, which is the seat of the civic government in Florence, in the Piazza Della Signoria, where it was unveiled on the 8th of September, 1504. The statue has than been moved to the Galleria dell’Accademia, Florence, in 1873, and later it was replaced at the original location by a replica.

As of the nature of the hero which is represented, the statue soon came to be the symbol of the defense of civil liberties embodied in the Republic of Florence, which is an independent city-state that was threatened on all sides by more powerful rival states, as well as by the hegemony of Medici family. The eyes of David, which were with a warning glare, have also been turned towards Rome.

However, the history of the sculpture starts before the work of Michelangelo on it from 1501 to 1504. Before the involvement of Michelangelo, the Overseers of the Office of Works of Florence Cathedral, which consist mostly of members of the influential woolen cloth guild, the Arte Della Lana, had some plans to commission about twelve large Old Testament sculptures for the buttresses of the cathedral.

In 1410, Donatello made the figure of Joshua. Then, Agostino di Duccio commissioned a statue of Hercules also in terracotta. Eager to continue the project, Operai contracted Agostino to create the sculpture of David. But, Agosto only got as far as beginning to shape the legs, torso, and feet, roughing out some drapery or probably gouging a hole between the legs. For unknown reasons, the association of Agostino with the project ceased, with the death of Donatello in 1466, and ten years after that, Antonio Rossellino was commissioned to take up where he stopped. But, his contract soon finished, and for 26 years, the block of marble remained neglected. After 26 years, and with the age of 26, Michelangelo convinced the Operai that he deserved the commission.

So, on the 16th of August, 1501, he was given the official contract to undertake this challenging new task. He started carving the statue early in the morning on the 13th of September, only one month after he was awarded the contract. He worked on the statue for almost more than two years.

The sculpture of Michelangelo is also a common theme in tattoo art. A tattoo of David may hold specific personal meaning for the bearer that an observer might never know, maybe marking a trip to Florence or simply an admiration of fine art.

However, for Michelangelo, choosing David as a subject of his work was not a matter of taste or simply to interpret some story from the Bible. The size of the David statue has been meant to proclaim the victorious struggle of Florence, where the allegiance of the sculptor was to become an independent city-state.