Home
Tattoo History
The Creation Of Adam, A Painting By Michelangelo Tattoo Designs.

The Creation of Adam is a fresco painting which was painted by Michelangelo, and which forms part as one of the scenes on the ceiling of the Sistine Chapel.

It also illustrates the Biblical creation narrative from the Book of Genesis in which God gives life to Adam, the first-ever created man. The fresco is part of a complex iconographic scheme and is chronologically the fourth in the series of panels, which depict episodes from Genesis.

The image of the hands of God and Adam that can almost touch has become iconic for humanity. The painting was also reproduced in numerous imitations and parodies. The Creation of Adam of Michelangelo is one of the most replicated religious painting of all time. 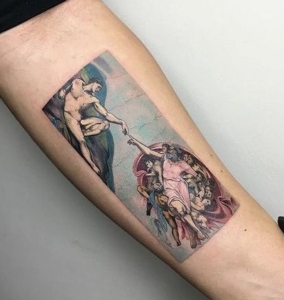 In 1505, Michelangelo went to Rome, invited by the newly elected Pope Julius II. He has been commissioned to build the tomb of the Pope, which was to include forty statues and be finished in five years period.

Under the patronage of the Pope, he experienced constant interruptions to his work on the tomb to accomplish several other tasks. Even though he worked on the tomb for 40 years, it was never finished to his satisfaction. The tomb is famous for the figure of Moses, which was completed in 1516.

During that same time, he also painted the ceiling of the Sistine Chapel, which took almost four years to complete. Originally, Michelangelo was commissioned to paint the Twelve Apostles on the triangular pendentives, which supported the ceiling and also cover the central part of the ceiling with ornament. He persuaded Pope Julius to free him, and he also proposed a different, as well as more complex scheme, representing the Creation, the Fall of Man, the Promise of Salvation through the prophets, and also the genealogy of Christ. The work is part of a larger design of decoration within the chapel, which represents most of the doctrine of the Catholic Church.

The composition also stretches over 500 square meters of the ceiling and contains more than 300 figures. Among some of the most famous paintings on the ceiling were The Creation of Adam, as well as Adam and Eve in the Garden of Eden, the Deluge, the Prophet Jeremiah and others.

In The Creation of Adam, God is often depicted as an elderly white-bearded man who is wrapped in a swirling cloak, and Adam, on the lower left, is entirely nude. The right arm of God is stretched towards Adam in order to impart the spark of life from his finger into that of Adam. His left arm is extended in a pose mirroring the right arm of God, a reminder that man is created in the image, as well as the likeliness of God.

Another point is that the finger of Adam and the finger of God are not touching at all. It also gives the impression that God, who is the giver of life, reaches out to Adam, who has still to receive it; both of them are not on the same level, as would be two humans that shake hands, for example.

When the famous painter Michelangelo painted his masterpiece The Creation of Adam onto the Sistine Chapel ceiling, he may or may never realized what a legacy he was leaving in the art, as well as the spiritual world – to say nothing of the tattoo inspiration which would follow centuries after its Creation.

Tattoo artists re-create a lot of famous works of art for their customers, and some of them are altered in the process. Sometimes, this whole painting scene is rendered, and sometimes there are just the hands. But, in keeping with the iconic and rebellious tradition which tattoo art in the West has, this particular image was seen with God, the Father holding out a beer bottle that Adam is about to catch. In both, the tattoo imagery and personal symbolism, nothing is sacred.

Inked in full scale across the chest or back, or also with two arms that are outstretched to one another and fingers touching as they encircle a part of the body, there are a lot of ways to depict the stirring tribute to the story about the Creation.

Michelangelo worked for many years over his triumphant dedication to God and man, and probably you have a similar triumph to commit to the flesh. For example, a birth, a new awakening, or also overwhelming achievement may all signify the beginning, the Creation of a new man.

You will have to be particularly religious or even a classic art enthusiast to appreciate the dramatic connection which exists between The Creation of Adam and your lifelong journey and valuable place in this world. This is a work of tattoo art for those that have not only experienced an awakening of their own but values like precious pursuits in other people.

Overall, The Creation of Adam is an interesting painting inspiration and image for a tattoo design, no matter if the tattoo consists of the whole image or just the hands of Adam and God that can barely touch each other.