Home
Tattoo Meanings
Celtic Tree of Life, Part Of The Tattoo Culture, Now and Then

In the modern world, we can find the Tree of Life symbol on all manner of items. The Tree of life is a popular tattoo request, and it is a stunning design for a necklace or pendant, as well as some other forms of jewelry. For the Celts and some other different ancient cultures, the Tree of Life was a significant symbol.

There is no question that the origins of the Tree of life predate the Celts as it is a powerful symbol in Ancient Egyptian mythology, among others. There are different designs that are connected with this symbol, but the version of the Celts comes from at least 2,000 B.C. This is the period when carvings of the design were found in Northern England at the time of the Bronze Age. Also, this predates the Celts by over 1,000 years. 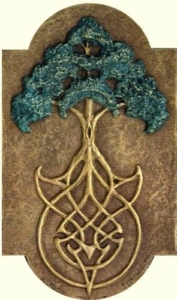 The Celtic Tree of Life is a design that is repeated throughout the great illuminated manuscripts which have made the abstract knotwork art of the Celtic famous. Just like the general Tree of Life designs that arise the world over, it is a central axis type of symbol which is connecting between Heaven and Earth, as well as symbolizing both the growth of life and the annual change of the seasons. It is also known from the Pictish stones of eighth-century Scotland and also hearkens back to the pre-Christian religions, which were centered around nature.

The Celtic Tree of Life is symbolic of harmony and balance. Maybe the central tenet of this Tree is the idea that all life on Earth is interconnected. Ancient Celts believed that this kind of Tree possessed some special powers. Also, it was a symbol of strength, wisdom, as well as longevity. Another representation was a rebirth, as trees shed their leaves in the autumn, hibernate during the wintertime, the leaves grow back in the spring, and then the Tree is full of life during the summer.

Nowadays, the Tree motif has become one of the most requested tattoo symbols, rivaling the much loved tribal symbol. A lot of people in the modern era look at trees and don’t give them a second thought.