The Christian worship during the Middle Ages also commented on this symbol. It claimed that it is the symbol of the first coming of the Son of God Jesus Christ, to save people from their sins. According to those sources, the first cross symbolizes his earthly life path that has endured the suffering of Golgotha. Also, the left Swastika, named suasti, is the symbol of the Resurrection of Jesus Christ. It also symbolizes his coming to the Earth in power and glory. 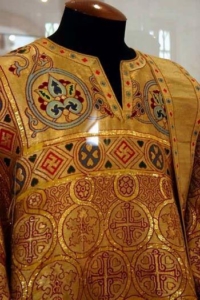 In Moscow, on the day when the king Nicholas II renounced the throne, in the basements of one temple was discovered the icon ‘The Virgin Mary.’ On the crown on the head of the Holy Virgin is shown the swastika symbol ‘Fash.’ For this old icon, many legends and common rumors exist. For example, according to one, after the personal command of Stalin, this icon stayed in the first front line and that there was a prayer, and thanks to her, the army of the Third Reich was prevented from occupying Moscow.

This is absurd. The German army did not enter Moscow for entirely other reasons. The Siberian Division blocked the entrance in Moscow, filled with the Spiritual Force and Faith in Victory. The power of hatred did not fill it or guided by the power of a party or some kind of icon.

The Siberians not only rejected all attacks from enemies, but they performed a counter-attack and won the war. This happened because the ancient spiritual principle lived and smoldered in their hearts. Their motto was:

“Who will come to us with a sword he will die from a sword.”

In medieval Christianity, this sign symbolizes the Fire and the Air element in which the Holy Spirit coincides.

With its use in Christianity as a divine sign, only unreasonable people can say that it symbolizes fascism! Fascism existed only in Italy and Spain, and among the fascists of those countries, there were no swastika symbols. Hitler’s Germany used the Swastika as a party and state symbol, which was not a fascist, but nationalist-socialist. And for those who are in doubt, read the text of J.V. Stalin, ‘The Extended Hands of Socialistic Germany.” This text came out during the 30s of the 20th century.

They believed in this symbol as in a talisman that attracted happiness and success. In Ancient Russia, if you draw a Kolovrat on your palm, everything will start functioning, and it will bring you success. Even today, students draw a swastika on the palm when they have exams.

The Swastika in Russia, Siberia, and India were drawn on the walls of the houses so that happiness can reign in them. In the house, where the family of the last Russian Emperor Nicholas II was shot, Empress Alexandra Fyodorovna painted all the walls with divine symbols. However, the Swastika did not help the family of the emperor. This is because his dynasty did too much harm in the Russian land, among the innocent population.

In our time, philosophers suggest that the city districts should be built in the form of a swastika. Being such a configuration, they generate positive energy, and contemporary science confirms this.

The generally accepted term of the Sun symbol – the Swastika, by one version, it originated from the Sanskrit’ Suasti.’ Here, su means nice, good, while asti means be, “Let it be good!” “Any good!”

After another version, the word has ancient Slavic origins, which seems more likely. This is present in the archives of the ancient Russian Orthodox Church of the old orthodox believers. The ancient Aryans – the Slavs – transmitted the Swastika in different variations and names in ancient India, Tibet, China, and Europe.

Until today, Tibetans and Indians confirm that Swastika is a universal symbol of goodness and happiness. They say that the White Teachers who arrived on the other side of the high northern Himalayan Mountains brought it.

In ancient times, our ancestors translated the word swastika (runa) in another way. The rune SVA signified the Heaven, from which we have Svarog, the Heavenly God. The rune TIKA meant a movement, a stream, a trick, such as in words Arctic, Antarctic, Mystic, and so on.

The ancient Vedic sources tell us that even our galaxy has the form of a swastika. According to them, our Yarilo-Sun system lies on one of the ends of the heavenly Swastika. And since we are at the end of our galaxy, where the ancient name is Swasti, it looks like a Milky Way.