The mother of Jesus is known as Mother of God, Mother Mary, Saint Mary, and the Virgin Mary. She is one of the foundations of religious tattoo designs. She represents the symbol of purity and motherly affection. Whatever you choose to call her, the Virgin Mary is a powerful symbol in the Christian religion, and therefore, it makes it one of the top choices for a religious tattoo. Men and women look up to her in difficult times of despair and sadness, and she always comes forward as a source of comfort, restoring faith and happiness in her believers.

The story of the Mother Mary has been sent down generations and written in the New Testament of the Holy Bible. According to the story, there was a woman named Mary that was set to marry a man named Joseph, who happened to be the descendant of David. During the sixth month of the year, Mary was visited by an angel who told her that she was highly favored by the Lord. She was nervous about this meeting, but the angel assured her that she has nothing to be afraid of. After that, the angel told Mary that she was going to give birth to a child, and she would name him Jesus. He was going to be the Son of God and receive the throne of the kingdom that will never end. She was curious as to how this was possible because she was a virgin, but the angel said that nothing was impossible with God. 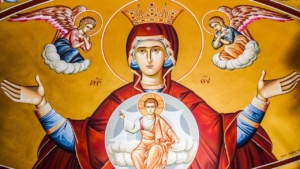 The story hints that Mary was between 14 to16 when she gave birth to Jesus. At that time, it was common for girls at this age to be engaged and married. Joseph, who she was set to marry, was probably around 30. This young couple would have been considered average in Israel during that time.

Meaning Of The Tattoo

No one decides to get the Virgin Mary tattoo without it having a significant meaning for them. It is a very recognizable symbol, and that is why someone might not even ask you what it means because they assume they know. The tattoo of the Virgin Mary might purely represent your faith in the Christian religion. However, it might also indicate some other things if you take a look into what it means. The Virgin Mary tattoo stands as a symbol of unconditional love and hope in troubled times. It is also used to console for those looking for help from the heavens. The Virgin Mary is considered as a kind of mother; we all hope we can have.

This tattoo is a great way reminder that the Virgin Mary is always there for you if you need her. The Virgin Mary tattoo also represents someone who has a forgiving heart, and that is willing to dedicate their lives to a belief. Often, those with the Virgin Mary tattoo are expressing their faith in the Christian religion, but even without that, the image itself is beautiful and would make a great tattoo. The symbol of Saint Mary is also a symbol of miracles since having a child and being a virgin is a miracle on itself, so when someone gets the Virgin Mary tattoo, they may be a believer in the idea that miracles can happen and that we should leave ourselves open to the idea.

When deciding to get this tattoo design, we can incorporate other designs to the tattoo in order to reinforce the ideas behind it. The Virgin Mary generally revolves around religious convictions, but the meaning can be far more personal. Below are a few ideas of the Virgin Mary tattoos and the meaning behind them.

The Virgin of Guadalupe is another title given to the Virgin Mary but has specific imagery and used more in the Hispanic communities. She is the protector of the poor, oppressed, and the outsiders. Prisoners often choose this tattoo as they look at it as a symbol of protection. Most prisoners with this tattoo feel they were wrong or have been oppressed.

The Virgin Mary holding Jesus is probably the most popular variation of this tattoo. This tattoo design can include Mary with Jesus at different ages or with angels surrounding her. The Virgin Mary symbol is a potent religious symbol, and adding Jesus or angels to the imagery only makes the image more powerful for the person that wears it.

Numerology is based on the philosophical insight that