In mythology, Cerberus is the archetypal hellhound, a three-headed, as well as dragon-tailed dog of ancient Greece and Scandinavia.  He stood guard at the gate to the Underworld, barring entrance to the living and exit to the dead. He was the offspring of the giant Typhon and the half-woman, half-dragon, Echidna. As the ‘Hound of Hades,’ he also symbolized the terrors of death and was generalized as the Hell to be found within each individual.

The Cerberus tattoo is associated with the world of the dead – as his guard and conductor of souls to the afterlife. A person that makes such a tattoo should have tremendous willpower 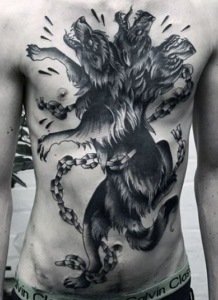 , as well as energy.

The meaning of Cerberus tattoo is a great strength and cruelty, loyalty to your ideas. Therefore, the person that chose this tattoo has to have a cruel, hard temper, sometimes even bloodthirsty, strong will, and severe character.

Cerberus tattoos are an interesting phenomenon right now, and the trend is about to explode in a big way. The guardian of the Hell is a godly omen of manliness. There are plenty of grand reasons to choose this glorious Cerberus tattoo.

Cerberus tattoos can be performed in different styles and on any part of the body. Still, the constant is the presence of a dog with three heads, which is an indication of increased aggression, a continual expectation of a threat, and the readiness to attack at any moment.

When you decide on a Cerberus masterpiece, you are going to discover that there are countless approaches to take, and each of them is equally stirring. For beginners, to render a realistic representation, you can also derive inspiration from a bevy of existing historical artifacts. These choices are going to ensure a total accuracy within your sublime artistic grandeur.

Aficionados of mythology love this animistic expression, and it digs dip into the annals of mankind’s lore to deliver dynamic devilishness.