Animals are one quite common inspiration for beautiful and stunning tattoo designs. Some of them are chosen because of their appearance, others because of their meaning and symbolism, and thirds because of their existence in people’s lives. One such animal, which is a common motif in tattoo art, is the dog, who is the trusted and loyal companion of mankind for more than 40,000 years.

There is no other animal that has the ability to capture our love and imagination, just like these great and beautiful creatures. 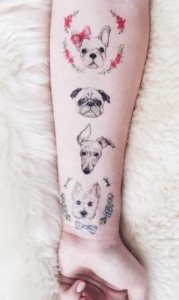 In a lot of cultures all over the world, dogs are seen as a part of the family. Also, they are often trained to take part in ceremonies and even to carry out daily chores. Some farmers train their dogs to be a helping hand around the farm, weeding out pests, as well as hunting prey. This is a tradition that continues even in the upper echelons of society.

From Lassie to Cerberus, dogs were always the constant companions, friends, as well as protectors of human beings. They are often believed to be protectors of the soul and, by extension, guardians of the ethereal plane.

Dating back for as long as human beings have appreciated the companionship and friendship of dogs, these animals were long considered to be sentinels to the other world.

Ancient Greeks, Egyptians, and Celts considered dogs as their spiritual guides. They have been long believed to be an ally for the human soul, while it has been between the spiritual and the physical realms.

Shamans also have long associated dogs with powers of the forest and recognized them as a savvy and keen wilderness guide. Over the centuries, the appreciation for dogs by people has only grown.

The dog was very likely the first domesticated animal. Just like now, then they were the symbol of companionship, faithfulness, and protection. In the Chinese Zodiac, those people that were born under the Year of the Dog are considered honest and loyal, or even selfish and stubborn.

In myth and religion, generally, the dog, or even doglike beast or god, is almost universally the guard of the Underworld. The companion of the man in the light of the day, the dog moves easily into the role of nighttime guide through the darkness of death.

Dog tattoos are definitely among some of the most famous tattoo designs, and the meanings tend to run from one to another. On the other hand, a dog tattoo may be representative of strength, loyalty, confidence, and teamwork.

There are people who like to associate their ink with obedience, protection, community, and friendship. As we can see, the list of the symbolic meaning of dog tattoos is quite long, and it may also include courage, guidance, intelligence, determination, guardianship, perception, and faithfulness.

Most of the dog tattoo ideas revolve around personal love or affection for a canine friend, and that is super-cool. Tattoos of dogs are most often pet memorials, too, showing not only rough and general characteristics of breeds but also the same fine detail of particular dogs seen in human tattoo portraiture.

Sometimes, as we already mentioned, a canine ink may be a memorial to a loyal friend that passed away on the spirit side of life. Those people who ink their passed away companion know the pain connected with losing a member of the family can be overwhelming. For example, getting inked with an image of your dog, putting the name and dates below will be a perfect way of memorizing them for the rest of your life.

There are people who choose to get the paw prints inked near their chest to symbolize that this dog is forever going to be close to their heart. The image which is closely related to their pet is daily going to remind them of that special connection the two of them are always going to share. Also, another creative way to pay tribute is to put the paw print of your dog on a paper while still alive, and after they pass away, use it as the template for your tattoo design.

Dogs can also be connected with the qualities of both the moon and the sun. Being a moon associated creature, the dog represents becoming harmonious with the shadows in life. Moon dogs also represent allowing ourselves to become untamed, howl at the moon. Sun dogs represent courage, vitality, and strength. Dogs connected with the sun can also symbolize bright self-expression and clear communication.

Dog tattoos may also come in different sizes or colors, and they can feature any number of dog designs. We highly recommend this tattoo design if you want to honor your canine companion for life.