The Tiger is one of the most revered cat species on the planet. This big cat represents the way we as humans want to live our lives – without inhibitions. They are ferocious and sensual, wild and untamable, powerful, and strong. 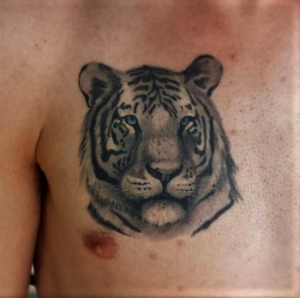 They are driven by instincts and passion and aren’t held back by ration and reason. These animals are solar totems; that is, they are ruled by the Sun. As such, they are seen as fiery and passionate. It is common to say that to be a great lover, and you must be a tiger in bed. This explains why their body parts are used in many ancient love potions and all-natural aphrodisiac concoctions.

Throughout much of India, tigers are emblems of unimaginable destruction. Rural villages still report instances, albeit quite rare, in which these animals have been accused of eating humans. Such attacks aren’t the norm, and in almost all cases have been triggered by humans encroaching on the animal’s territory. Through interrupting the animal’s food supply, humans have forced sick tigers to take desperate measures.

These animals are also popular characters in pop culture. Who can forget Tony the Tiger or the blockbuster smash hit, Life of Pi? In both instances, the Tiger is seen as a guardian or protector of sorts, making sure that we eat a healthy breakfast or have a safe journey. In recent years, ligers have become a memorable, lovable figure of our culture, and this curious blend of two powerful beasts can only be seen in zoos across the globe.

In Chinese folklore, these animals are seen as protectors of the dead. To decorate a graveside or tomb with the image of this big cat is to pay your respects to the soul of the deceased and ensure that he or she travels safely through the Afterlife. Their images are used to ward off evil and misfortune, and the animal is often depicted with the god of Wealth, Tsai Shen Yeh.

The Meaning of Tiger Tattoos

This animal embodies many traits, including:

When it comes to getting a tiger tattoo, the phrase “go big or go home” comes to mind. This animal is considered to be larger than life; its vibrate hues and intricate patterns must be detailed with brilliant artistry and skill. Like in the case with the designs of most big cats, it’s best to put a tiger tattoo atop a major muscle group so that the beauty of the animal and the design seems to come to life with every twitch.

This big cat is recognized as a symbol of power and invincibility, so it’s no surprise that elite soldiers get tribal tiger tattoos. These designs are in line with the belief that doing so infuses the wearer with the power and spiritual energy of the animal totem and is a way to make a connection with, and draw resources and inspiration from, these sacred totems. Such tiger tattoo designs represent power, strength, dominance, and fearlessness.

No matter how intimidating and fearsome a tiger may be, nothing evokes the emotionally charged “he’s so cute” quite like looking at a baby tiger. Given that these animals are, in general, solitary animals, the female of the species is renowned for being devout mothers. Baby tiger tattoos represent innocence and fragility. They are a tip of the hat to the relationship between a mother and a child.

Eye of the Tiger Tattoos

The Tiger’s eye represents a symbol of focus, patience, and determination. Survivor’s eye of the Tiger is the most fitting soundtrack to show the relationship between “a man and his will to survive.” This tattoo design symbolizes your most primitive desires; you are moving and thinking only on instinct and drive. The eye of the Tiger presents the animal in its purest state; it is stalking, hungry, focused, and, most importantly, lethal.

The butterfly is considered a fragile creature that must be handled with tender love and care. It is a symbol of femininity and harks back to the concept of the ‘ delicate nature of the Fairer Sex.’ Contrary, these animals represent a symbol of power, strength, passion, and sexual prowess. These designs represent humankind’s most untamable hidden desires. This tattoo is an excellent juxtapose of two seemingly unrelated concepts. In essence, this design shows that you should never judge a book by its cover. These tattoos are most often worn by women and signal to the world that even the most fragile being can be tough and untamable on the inside. It represents the inner strength and reserved power of women.

According to Chinese legend, the universe is held in balance by five powerful tigers, and each of them as a totem has a vibrant hue and has a specific task to complete and is the ruler of a natural element. The white Tiger stands as a ruler of autumn and governor of the element, metal. The black Tiger is the controller of winter and the element, water, whereas his counterpart, the red Tiger, is the guardian of summer and ruler of the element, Fire. The blue Tiger is the totem of spring and the element, Earth. Just as in the Lord of the Rings, there is one tiger to rule them all. The yellow Tiger is a being born of the Sun with the duty of keeping its companions in line.

According to the Chinese folklore, these animals and the dragon are mortal enemies eternally engaged in a fierce battle. Both animals represent the totems of Mother Nature and stand for power, strength, passion, and desire. What makes these two different is the way in which they interact with the world around them.  The dragon is a wise creature and a being of knowledge that is in tune with the fundamental elements of the world, whereas the Tiger is a creature of brute strength and primal power. A dragon tiger tattoo can symbolize the struggle between the mind and the body.