Being one of the earliest domesticated animals in the history of humans, cats also have a long history of cultural symbolism. The symbolic meaning of the cat differs wildly all over the world and through time stretching from positive thru highly negative symbolism.

For instance, in ancient Egypt, people believed that cats were an incarnation of the moon goddess, known as Bastet. It has also been an ill omen in Japan, a stock which is unmoved by the death of Buddha in Buddhism, a creature distributed by the Celts, given seven lives by Muslims, as well as a symbol of cunning for the Pawnee of North America, and attributed with clairvoyant behavior in central Africa. 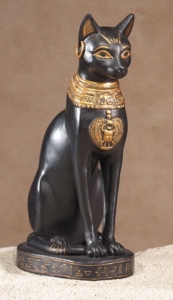 In those many cultures, cats are most revered for their dual nature, both docile and fierce. Nowadays, cat imagery is also used in tattoo art, and depictions of household pets dominate it. As pets, we usually associate them with playfulness, some aloofness, as well as a great deal of affection. As it can be seen in the animals themselves, their images span the great variety of the species, in both forms, as well as color.

Cat tattoos should be one of your choices, which you should consider when it comes to body art. Now, cats are thought of as free-spirited and independent animals. People love having them as pets as they keep them entertained with their playful antics and funny actions. Symbolically, they are related to different meanings like beauty, mystery, magic, freedom, vitality, mischief, royalty, hidden power, and a lot more.

Also, there is a belief that cats have the power to transit between the physical world and spiritual realms and communicating with the deceased spirits. Women love cats more than men, as they are a symbol of femininity, grace, and elegance. Other symbolism that cats express is:

The beauty and symbolism of cat art depend upon the expertise of the artist who has created the tattoo too.