Home
Tattoo Meanings
Chinese Imperial Dragon: The Power And Authority Of The Emperor

When it comes to the Asian country’s tattoos, dragon images always come to mind. The dragon is the main character of Asian tattoos. In different cultures, the same image can have a lot of different meanings.

This is also a popular and influential design that is worn by both women and men, and even though it can be designed in different sizes, the detailing and shading make this tattoo a larger-sized project. Some of the attributes which are connected with the dragon are strengths, independence, and courage.

In some countries of the East, as well as of Asia, the dragon is a symbol of positive and creative power, and it is considered a creature that is sympathetic to people. It has supernatural power and commands the forces of nature: air, earth, fire, and water. Because of this, the golden one is the emblem of the Chinese imperial family. 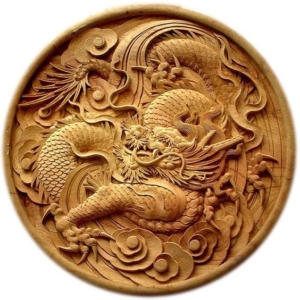 These tattoo designs are a very special thing to discuss. In the mythology of ancient China, the dragon is described as a being that is composed of several non-mystical animals. It also has a head borrowed from the images of a camel; horns were taken from a dear, and eyes are taken from a rabbit. Its ears were also taken from a bull and its body and neck from a snake.

The imperial one was distinguished from the lesser dragons by being the only one that has five claws, which were said to be derived from the capacity of the Dragon King to issue commands by moving in four different directions at the same time while remaining in the center, the fifth direction.

This was also considered the fifth creature of the Chinese Zodiac. People that were born in this year were strong-willed, and often successful, either marrying young or staying single forever.

As we already mentioned, this mystical animal can have different animal-like forms like turtles and fish, but they are most frequently displayed as snake-like with four legs. Traditionally, they symbolize potent and auspicious powers, especially control over water, rainfall, typhoons, and floods. It is also a symbol of power, energy, and strength, as well as good luck for people that are worthy of it in East Asian culture. At the time of Imperial China, the emperor used this creature often as a symbol of his imperial powers and strengths.

A traditional Chinese dragon tattoo for both men and women has already become a classic. A Chinese style tattoo that is extremely popular at the moment shows all the signs of the Oriental tattoo culture, together with its influence on the tattoos of the West. Despite being the symbol of four elements – water, earth, fire, and wind – he is also a symbol of the East, West, North, and South. At the same time, it is the symbol of the underworld, the water, the earth, and the sky.

According to some legends, these creatures were the leaders of the four elements mentioned above. Therefore, the dragon of each component had its characteristics. The Chinese people believed that the fire-breathing dragon to be associated with rain and lightning, and a symbol of fertility. A water dragon was also believed to be the guardian and protector of the lake, streams, as well as rivers.

This animal also represents balance. For the Chinese people, the dragon represents one half of the yin and yang; the other half is represented by Phoenix. The Chinese believed in finding the perfect balance for yin and yang, and dragons can also be a symbol of the perfect mixture of good and evil. A lot of people choose a dragon tattoo in order to represent some kind of balance in their lives because it is thought that balance is, in fact, crucial for success.

However, the Chinese imperial dragon is more than a huge creature that resembles a snake. As we already mentioned, it is the symbol of the four elements that are neither evil nor good. As water or earth, wind or fire, a dragon can be both cruel and kind. Although dragon tattoos are often colorful and bright, a tribal dragon design, for example, usually combines red and black colors. The Chinese dragon is usually black or of different shades of grey. Also, they are combined with some other creatures, such as tigers, Phoenix, or even combined with some hieroglyph or even fire.