Throughout history, countless artists have found inspiration in Venus, the Roman goddess of love. Derived from Aphrodite, Venus is a prominent deity in ancient Greek mythology. She was central to Roman worship and, in turn, to the art of the time. Even though in the 2nd century BCE, Venus de Milo was perhaps the most known figurine of the goddess, it’s not the oldest one found. In fact, that honor and recognition are given to the Venus of Willendorf, a piece that predates the myth itself by over 20,000 years. 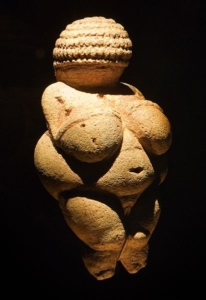 This small statuette was first discovered in the early 20th century. People retroactively gave the title based on the belief that it was intended as a fertility sculpture. Even though this theory has held water for years to come, historians, archaeologists, and other experts in the field today still aren’t 100% certain about its portrayal, purpose, or even origins. This makes this sculpture one of the greatest mysteries in the world.

The Venus of Willendorf represents a 4.4-inch tall carving that was discovered in Willendorf, Austria. It is thought that it has been made between 30,000 and 25,000 BCE. That’s one o it one of the world’s oldest known works of art. Made f the reasons from limestone decoratively tinged with red ochre, the statuette depicts a nude female. Although this sculpture has no face, the crown of the figure’s head is ornamented with a repeating design resembling either a braided hairstyle or a patterned headdress. Something more fascinating than the sculptor’s decision to leave the figure faceless, however, is the way that he or she chooses to depict her body. He managed to do that by exaggerating proportions and highlighting her features connected to sexual reproduction and fertility.

Due to the prominent breasts of the figure, rounded abdomen, and well-formed hips, most of the scholars, over time, have reached the conclusion that the carving was intended to be a fertility statue, or “Venus figurine.”

What are Venus Figurines?

A Venus figurine is considered a small statuette of a female figure designed during the Upper Paleolithic era. While the details around the figures’ origins are misty, most historians believe that people used them in rituals and likely celebrated ideas associated with fertility, including femininity, goddesses, and eroticism.

Nowadays, 144 fertility figurines have been discovered in Europe and Asia. Although not all of these figurines share the Venus of Willendorf’s voluptuous features, most do. The reason for that is because, during the Stone Age, such an image was inherently linked to a woman’s capability to conceive, making a full-figured woman an ideal subject for a sculptor interested in infertility.

People responsible for constructing this statue lived in harsh ice-age surroundings where the features of fatness and fertility were desirable. This means that in Paleolithic people’s terms, the parts that mattered most had to do with successful reproduction, such as the breasts and pelvic girdle. Because of that, these parts were isolated and amplified by the artist’s brain.

Due to the sexually charged nature of these statuettes, Paul Hurault, an amateur archaeologist who first revealed such a figurine in 1864, opted to name them after Venus, the goddess of love, beauty, desire, and sex.

Although at first was intended to be whimsical (Hurault deemed his ivory breakthrough the Venus Impudique, or “immodest Venus,” or known by the term Venus pudica, a pose well known in Classical art.), the name remained. The Venus of Willendorf gained a similar title when it was unearthed nearly 50 years later.

The Venus of Willendorf’s Discovery and Legacy

On August 7, 1908, Johann Veran discovered the tiny statue while participating in excavations at a Paleolithic site near Willendorf, an Austrian village. At first, archaeologists dated the sculpture to around 10,000 BCE. However, the studies done later have led to an increasingly earlier origin.

In the 1970s, researchers agreed that it was around 20,000 years old after the analysis of the rock layers in 1990 when archaeologists found the piece. However, they revised the date to 25,000 to 30,000 BCE, which is a hypothesis that remains the most prevalent today.

In addition to its astounding age, the Venus of Willendorf is paradoxically celebrated for the obscurity that surrounds it. Though little is known about its beginning, it has come to be not only an emphasis of the Vienna’s Natural History Museum but on art history as a whole.

Today, we can find the sculpture of Venus of Willendorf in the world of tattoos since it can be used as a tattoo design. This is a design that comes with motherly solid symbolism and power. The ability to bring life to this world is one of the strongest, if not the strongest, an ability that any living thing can have. As such, this is design with deep symbolism and powerful, robust meanings that can bring a distinct and unmistakable message to your tattoo design.