Angel tattoo in the tattoo culture has deep meaning, and it’s one of the most used items in creating beautiful tattoo pieces.

The word “angel” originates from the Greek language from the word “messenger.” Angels are most frequently represented throughout the Christian Bible as spiritual beings that intermediate between the supernatural world and the world of humanity:

However, this does not indicate when the creation of angels happened. An angel, in virtually any culture or period, represents benevolent spirituality.

Angles are well-known all over the world, and they are part of Christian, Islamic, Jewish, as well as other religious belief systems. In some religions, angels are ranked, as well as categorized by some specific characteristics, and they are even personally named, such as Archangel Michael. But generally, their existence in these religious systems implies a belief in a particular spiritual order – one in which humans have a specific place. 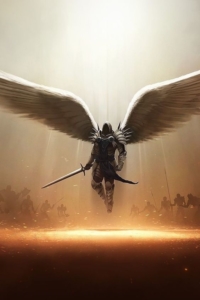 Few designs can match the beauty and meaning of angel tattoos. Most people already know what angels are and what they represent. Sometimes, angel tattoos take the form of innocent cherubs or righteous avengers, but most frequently they are described as gentle guardians, guides, and personal protectors. All these characteristics make the angel tattoo highly demanded and popular.

Indeed, much of what angels do, even in tattoo symbolism, revolves around their relationship to humans. While their activities are unlike ours, such as playing music, their actions remain at some sublime level – a level for which humanity longs.

As we already mentioned, a variety of meanings are connected with angel tattoos. Most of them are based on what kind of angel is being inked. Some of the ideas are spirituality, Christianity, hope, protection, security, faith, strength, guardian, free spirit, freedom, innocence, purity, love, loyalty, courage, dignity and so on.

Angels can also change meaning depending on the wearer. For instance, on women, they are thought to represent serenity and calmness, while on men, they describe the higher self. Finally, the meaning of your tattoo shows what you want it to be.