Home
Tattoo Meanings
What Does It Mean To Have A Sunflower Tattoo Design?

Sunflower, accordingly with its name made up of sun & flower, in tattoo artwork, is used both in floral patterns and as a symbol of the sun.

It is a flower adored by many for its bright color and easily identifiable shape. A sunflower watercolor tattoo is typically due to these bright colors. It is famous for its distinguishing ability to follow the sun turning towards the sun’s rays all day long. It is also called “the happy flower” and is considered the most positive symbol among the florets. With its radiant yellow to reddish petals in a round circular shape, it resembles the sun; thus, it is usually associated with warmth, happiness, and hope. 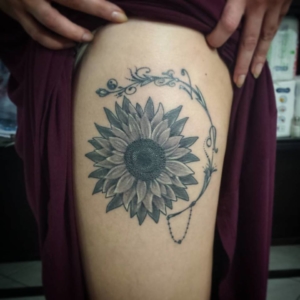 As a stunning flower, its use is versatile, being used as an inspiration for weddings, interior decor, garden landscapes, as well as a tattoo adornment on people’s bodies. Its nature is unique, and the symbolism is great which made them one of the most popular choices for tattoos. They have an alluring quality and an aesthetic value of their own. They have deep meaning, and they are pleasant to the eye, which gives people and tattoo artists the inspiration for many different ideas and combinations of patterns and colors to be intertwined in a unique sunflower tattoo for different parts of the body.

Besides being used in combination with other famous flowers in tattoo art, it is commonly used also as a symbol of the sun and what the sun symbolizes.

The sunflower has been associated with the sun since ancient times. There is an ancient Greek myth about a water nymph named Clytie, who was in love with Helios, the Greek God of the Sun.

The story goes that although they were in love, one day, Helios abandoned her for another woman. Clytie was furious and told the father of this girl about the affair after the father had to bury his daughter alive in the sand because she was defiled by Helios. Clytie hoped that she will win Helios back now that the girl is dead, but he was only angrier and left with his chariot towards the sun high in the sky. She then decided to take off her clothes, and sit naked on the rocks, without any food or drink, to wait for his return, always gazing at the sun.

She was sitting like that continually looking up to the sun, hoping for her one true love to return and forgive her so that they can be reunited. After nine days of hoping and mourning the loss of her beloved one, she transformed into a sunflower.

The first natural sunflower was noticed in Mexico back in the time of the Inca Empire in pre-Columbian America (1438-1533). They used to believe that their God is The Sun, so they worshiped the flower that looked exactly like the sun. According to them, the sunflower was representing God.

During the 16th century, sunflower was imported to Europe and other parts of the world.

In Eastern cultures, it was always related to good health, joy, and luck.

In China, the yellow color represents intelligence and self-awareness, happiness and positivity, and energy and vitality. The sunflower symbolizes good luck and longevity. Therefore it is also considered to be therapeutic. Because of its vibrant yellow color, it is closely connected to chakra therapy or color healing therapy (a non-invasive holistic treatment).  The yellow color of the sunflower is here related to the solar plexus chakra, Manipura, related to the forces of intelligence and self-awareness of a human being.

In Christianity, the sunflower is a sign of God or God’s love for his people. According to Esoteric Christianity, it is a symbol of spiritual love and a sign of spiritual attainment. It represents the strong faith in God, the unchanging faith of the good Christians that could guide their souls to heaven when they die.

Among the Dutch people, it is a symbol of a loyal and devoted person.

A pair of sunflowers becomes a symbol of two beloved ones, so it is sometimes the perfect choice for couples in love, meaning that the tattoo shall bring their love throughout all their lives.

The sunflowers are reborn every year and symbolize new beginnings, new periods of success, and reaching goals both in career and personal life that result in a much happier life.

In nowadays, in modern tattoo art, the depicted sunflower on the body usually stands for some of the symbolism mentioned above and more: happiness, warmth, longevity, vitality, religion, remembrance, faithfulness, gratitude, grace, intelligence, as well as charm, and femininity.

Sunflowers make gorgeous tattoo designs, as single flower designs with or without modifications and added details, or as a part of a bigger flower or other patterns. With their unique appearance and rich meanings associated with them, it gives great inspiration to the tattoo artists and a possibility to play with the shape or look of the petals and the inner circle, by shading or adding colors, to create a special tattoo design for every single customer according to their own distinctive beliefs in the sunflower symbolism.

As a tattoo design, the sunflower is adored mostly among women, but it can be shaped and also suited for men.

It is said that people that want to engrave a sunflower tattoo on their body usually give justice to it. In other words, the people who correctly wear sunflower tattoos with confidence are flower lovers, positive thinkers, fun-loving individuals who just love the sunshine, and life in general.