Home
Tattoo Meanings
What Does Mandala Represent In The World Of Tattoos?

If you have heard of Mandala and you don’t know what it is, here we will give you an explanation. Moreover, we will talk about Mandala tattoos and their symbolism in the world of tattoos. The history of Mandala goes back to the prehistoric era. 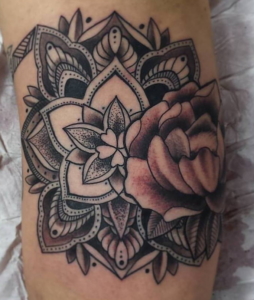 It is a form of art that ancient people used in order to represent the entire universe. Also, it is the symbol used in the spiritual aspect of Hinduism and Buddhism. Even though it is an ancient art, a lot of people are still in awe at how great it actually looks.

Mandala is the Sanskrit word for “circle,” which is generally the shape that this symbol takes. This design is a spiritual, or ritual geometric configuration of symbols or a map in the Indian religions of Buddhism, Hinduism, Jainism or Japanese lifestyle of Shintoism. This configuration of symbols represents deities, or in the case of Shintoism, it represents paradises, kami, or actual shrines.

In modern, often American use, “Mandala” has become a generic term for any diagram, geometric pattern or chart which represents the cosmos symbolically or metaphysically. It also represents a time-microcosm of the universe. However, originally it meant to represent wholeness and a model for the organizational structure of life itself. It was showing us our relation to the infinite and the world extending beyond and within our bodies and minds.

The principal form of most Mandalas is a square with four gates, containing a circle with a center point. Each of the gates is in the general shape of a T. Every one of these designs usually has radial balance.

The term appeared in the Rigveda as the name of the sections of the work. Vedic rituals are using Mandalas like the Navagraha Mandala to this day too. Mandalas are usually utilized in Buddhism.

In a lot of spiritual traditions, practitioners and adepts employ Mandalas for focusing their attention. They use it as a spiritual guidance tool for establishing a sacred space. Also, they use it as an aid to meditation and trance induction as well.

Among the many alluring, beautiful tattoos available, the Mandala tattoo is one of the most popular. In Buddhism, people use the Mandala as a way of honing their focus. The floral or geometric designs draw your focus into the center of the Mandala. In this way, they aid meditation practices.

Just like we already said, Mandala is a Sanskrit word for “circle.” Used in both Buddhism and Hinduism, they are complex representations, varying combinations of brightly colored circles, rectangles or maze-like paths. These things depict the world-order – physical, spiritual, and mental – and they frequently serve as a meditative focus.

Tattoo designs, even though small, are full of details. They reflect the same myriad choices in terms of internal structure and color that their larger counterparts do.

The most common meanings of the tattoos of Mandala have a connection with spiritual matters. The circular shape of the symbol represents wholeness, perfection, balance, and eternity. For more than thousands of years, this symbol was used in different religions. The most common ones are Buddhism, Hinduism, Paganism, and Christianity.

In these four religions, this symbol has different symbolism and meaning, such as:

Tattoo artists build Mandala tattoos on symmetry. They start from one fixed point and draw the heart of the Mandala. This core design may be based on one idea, or it may be an existing shape or image. After that, the artists construct each layer surrounding it, taking into account the angle of rotation and the number of points on the Mandala.

Every person has a different vision of what elements they would like to include in their Mandala. This is what actually gives each of these design a unique symbolism and meaning for every person.

Since the Mandala represents more of an abstract and individual design, artists spend time consulting with their clients. They do so in order to hear their ideas, and show them, or even ask them to see existing templates that they can build on together.

Tattooing such a meaningful and intricate design like the Mandala requires more than the usual tools. When an artist starts to design these tattoos, he or she uses a ruler and a compass. However, after that, he or she improves the technique with computer programs.

It is unsurprising that there is an endless number of Mandala tattoo designs. This is partly because of their historical past and significance in different religions, and partly because of their intricate design. Ranging from simple designs to more attractive ones, there is definitely a design for everyone. Depending on the meaning you would like your tattoo to have, you may choose different designs.

These tattoos are very popular nowadays, and thanks to their popularity, people know more about Mandalas and their history.