Tattoos are considered as body art that shows a part of your personality to the rest of the world. However, your tattoos do not define who you indeed are. In the world of criticism and judgment, people with tattoos are thugs, rebels, weirdo, or a part of a cult. It’s unfair for people with tattoos to go through something like that. People should try to understand the meaning behind symbols to appreciate it. It’s such a waste to have artistic body tattoos, and no one to understand the message you are trying to convey. For instance, a wolf tattoo holds so much meaning and is not only an animal tattoo. It stands for the traits of the person wearing the symbol.

Tattoos are not only what meets the eyes. Tattoos carry within hidden messages and are not only meaningless symbols and shapes. Behind each tattoo, there is a personal meaning to the person wearing it. There are stories behind every tattoo, stories that are perhaps too personal to share in words.

Wolf tattoos are some of the most popular tattoo designs for males and females. It carries a definite meaning for every person wearing it. It’s also one of the few animal tattoos that have deeper connections with humans. That’s one of the many reasons why people decide to get wolf tattoos nowadays.

A wolf tattoo can be of any kind. For instance, it could be a tribal tattoo, a realistic tattoo, a traditional tattoo, or a cartoon tattoo. It doesn’t matter which type of tattoo art you will get. The important thing is the design of the tattoo and what it means to you. Besides, when wolf designs are combined with other symbols, they are more meaningful and more picturesque.

Below are some of the most eye-catching designs of wolf tattoo that you will surely love:

In this design, there is a combination of both moons and wolf. This is the most common type of wolf tattoo that is most often chosen by both men and women. This design is a representation of a howling wolf facing the moon. 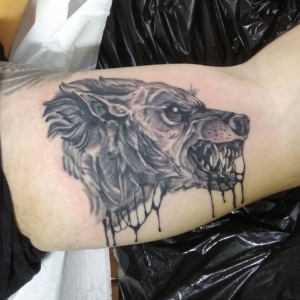 A lot of films and illustrations have used this exact set-up to depict a character’s desire to voice out his inner self. In tattoo’s, it’s used to symbolize the inner feelings of the wearer that he/she wants the world to know of. This tattoo also shows a person’s desire for a total transformation.

This is a popular wolf tattoo design that is perfect for women because it has feminine touch, probably thanks to the addition of heart in the design. In this tattoo, two wolves are standing next to each other, or are facing each other. When you look at the bigger picture, you will notice that the two wolves take the form of a heart. This kind of tattoo usually stands for family and love. It symbolizes the bond between family members. The wolves in this design do not have fierce faces. Still, instead, their faces look calm and gentle, representing how family members see each other despite showing their strong personality to other people outside the family.

This tattoo is considered as one of the most complicated designs ever. The reason for this is because drawing tribal wolf tattoos require precision and utmost dedication. Usually, this tattoo represents a combination of many tribal strokes and lines. The artists form the face and neck of the wolf by only using those tribal strokes and lines. Outlining this tattoo is one thing; however, shading it is another story. Tribal wolf tattoos are viewed as eccentric and detailed. This tattoo symbolizes a person’s secure connection with his culture and ethnicity.

Instead of using only the face of the wolf, this tattoo also includes the paws as part of the design. This design is quite complicated. This design shows the expertise of the tattoo artist doing the procedure. In this tattoo design, you will only see the wolf’s paw at a distance. Upon closer inspection, you will see that the wolf’s paw contains the head of the wolf. It’s a masterpiece that is timeless and classic. This tattoo design symbolizes progress. Every person wearing this kind of tattoo is someone who is always going forward.

A wolf tattoo could carry several purposes, depending on the person wearing it. The definition of wolf tattoos is presented on the characteristics of the wolves. Many people are afraid of wolves. This is probably because, in movies, wolves are the bad guys. Wolves symbolize the alter ego of the antagonist, which is one of the reasons why many people find wolves frightening. People often misunderstand wolves’ facial features. The eyes of wolves are fierce and are evidence of their evil nature. However, that’s not always true. Some wolves are tame and calm.

Wolf tattoo is most commonly interpreted as symbolizing strength and power. Wolves possess a unique ability that allows them to survive even the harshest conditions. This characteristic of wolves has the reason why they are known as powerful creatures. A wolf tattoo may also stand for family. Myths and folklores prove that wolves have families, and the bond between family members is exceptional. Wolves are naturally loyal to their family. That’s the reason why many people decide to get this kind of tattoo to express their love for family.