Home
Blog
Barbed Wire Tattoos: Why People Want This Tattoo On Their Skin?

The barbed wire was created as a fencing material that is used in ranching in the American West in the late 1800s. During history, it also came to symbolize more than just the control of space and land.

The barbed wire, which is also known as “barbwire” or “barb wire,” is a spiked fence that has iron or metal wires wound around each other, in addition to long metal thorns or pins sticking out. It first patented in 1867 by Lucien B. Smith, who was from the United States of America. This technology has been introduced with the intention of keeping cattle away from the fields and the backyard garden. However, soon the barbed wire was also used for restraining people and helped keep robbers away. It was also widely used in prisons and mental asylums to prevent inmates from escaping easily.

Because of its wide use in prison and war camp settings, the barbed wire also carries a connotation of suffering, as well as contentment and capture. 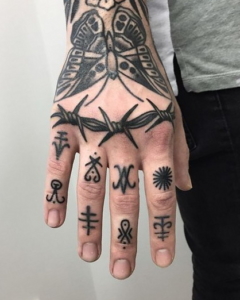 Every one of us has noticed barbed wires, but we have also seen people wearing them as tattoos. So, you will probably ask yourself, why would someone want to get a barbed wire tattoo on their skin?

The popularity of this motif in a modern tattoo can be directly attributed to its use in armband styles and similarity to tribal styles, as well as the move Barb Wire from 1996, starring Pamela Anderson with her armband barbed wire tattoo.

There are three meanings in particular behind the barbed wire tattoos: