Different religions in the world have different perspectives and stand on the art of tattoos, especially on religious tattoos.

For example, the Christian world has had love or a relationship with tattoos for centuries. While the abundance of the Christian-themed tattoos is the testament to the popularity of this practice among the Christians, the official position of various church officials through the time has occasionally included prohibitions of one type or another.

Some Christians take issue with tattooing, upholding the Hebrew prohibition, which was based on interpreting Leviticus 19:28 “Ye shall not make any cuttings in your flesh for the dead, nor print any marks upon you,” to prohibit tattoos and even makeup.

People that were on both sides of the problem were citing biblical scripture in support of their positions, as it is also the case with some other religions, as well as their attitudes towards tattoos.

Below, we are going to present you three types of designs that are drawn from the rich symbolic tradition of Christian art and tattoos: the Crown of Thorns, Crucifix and Crucifixion tattoo designs.

The three most common Christianity-related tattoos:

A crown is something which people often envision atop the head of royalty, encrusted with jewels and gold. In the time of Christ, the crown has been a military decoration, which was worn by the emperor that was presented by its soldiers, for saving the lives of his citizens. This is the reason why, according to the four gospels that a crown made of thorns was placed on the head of Jesus during his crucifixion – to mock his assertion of the authority of the word of God and “Savior of the World,” and even to cause him pain.

So, the crown of thorns is a Christian art symbol for the humiliation, as well as the suffering of Jesus Christ, in his last several hours before his crucifixion. Called “King of the Jews” by the Romans, they dressed Jesus in a scarlet robe and then placed staff in his right hand as a form of ridicule.

In the religious tattoos, not only is suffering that Jesus was crowned with thorns, but frequently, the sacred heart is as well. Separate from Jesus, the circled vines of thorns which form a crown, is still the symbol of suffering and humiliation, but also selfless service. 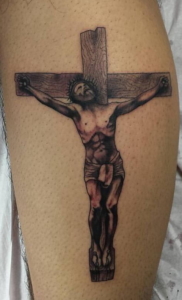 Although most of the time, the words crucifix and cross are used in the same word, they are different. The crucifix is the cross with the figure of Jesus Christ crucified upon it. Therefore, it is the primary modern icon of the Christian faith and one of the most popular tattoos in the Western World.

In a lot of different countries, the crucifix is the focus on altars, both private and public. Mariners believed that a cross or crucifix tattooed on the back would spare them from punishment with the lash.

There are a lot of people who wear this type of religious tattoos to symbolize something specific or even demonstrate their faith in Christianity, while there are also those that use it as a talisman, much like some other religious symbols.

The imagery, just like in Christian art, ranges from the minimalist abstract version to the finely detailed, as well as ultra-realistically rendered images of the entire crucifixion scene.

The crucifixion of Jesus Christ happened in the 1st century Judea, which is most likely between AD 30 and 33. The crucifixion of Jesus is described in the four canonical gospels, referred to in the New Testament epistles, attested to by other ancient sources, and it is established as a historical event which was confirmed by non-Christian sources, even though there is no consensus among historians on the exact details.

According to the four gospels, Jesus Christ has been arrested and tried by the Sanhedrin and then sentenced by Pontius Pilate to be scourged, and finally crucified by the Romans. He was stripped of his clothing and offered wine, which was mixed with myrrh or gall to drink after he said that he was thirsty. After that, he was hung between two convicted thieves and died after six hours or so. During this period, the soldiers affixed a sign to the top of the cross stating “Jesus of Nazareth, King of the Jews,” which was written in three different languages.

Apart from the individual crucifix, the crucifixion is an oft-invoked image in Christian tattoo symbolism. From the moment that Christ is first made to carry his cross through the streets of Jerusalem, to the moment of his death between the two thieves of Golgotha, a lot of different tableaux were captured by artists, which include tattooists too.

Apart from depicting the two different and important points of the story, these kinds of religious tattoos are the art symbols of Christian faith. To show a complete scene, tattoos of crucifixion imagery are usually larger, as in a back piece.

These are the three most common tattoos related to Jesus Christ and faith in Christianity. I hope you like it!