Since times immemorial, tattoo lovers and creative designers were looking for unique design elements to create fabulous and innovative designs that are high in aesthetic and symbolic value. One of the most unusual concepts that gained popularity for both the sexes over some time is a crown tattoo. Crowns are always valued by the human race as a symbol of royalty, supremacy, wealth, power, and bravery too. So, if you sometimes felt like a queen or a king, and you also love tattoos, a crown tattoo design and symbol will be an excellent choice for you. Having such a strong visual appearance, as well as oozing with symbolism, crowns were part of tattoo imagery for decades. 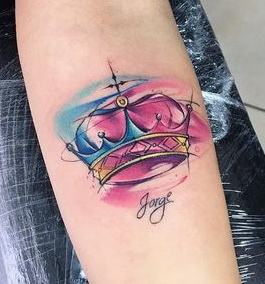 As an object, the crown is the emblem of a ruler, standing for his or her dominion and sovereignty. Symbolic from the very start, it is not a surprise the image translated onto the skin embellishing arts, in the form of simple or even more elaborate crown signs.

One of the main reasons for the popularity of crown art is its versatility, which makes it subtle for both men and women. Moreover, these tattoos may be featured in small or also large sizes, and that depends upon the place chosen for them and what the bearer wants to convey through them.

Another interesting thing which makes them more versatile and popular is that they can be inked on their own or also in combination with other different elements like diamonds, jewels, crystals, each of which can add entirely new meaning and dimension of the tattoo design.

The variation in design is something that will make it more desirable for tattoo lovers worldwide. The design may also be interpreted in various ways by different wearers, and each one may have a unique significance.

As we all know, crowns are worn by the kings, queens, as well as the high class, a fact which often associates them with supremacy, royalty, and power, since ancient historical times in the whole world.

The crown usually symbolizes that which is royal and above the common man, legitimizing the wearer and associating him or her with some higher spheres or authority. A lot of cultures utilized the crowns of the enormous variety to mark not just their leaders but their gods too.

So, as we already said, the crown signifies the highest authority in a kingdom, and in that way, it stands for the heights a person aspires to reach in his life. Wearing a crown is not simply a matter of pride and power, but it often brings responsibility, and that is the reason why people regard the king to be God-like, and in some cultures, even the Gods are pictured wearing crowns.

Crowns also have religious importance. In Christianity, Jesus Christ has been made to wear a crown of thorns at the time when he was crucified, and that adds a spiritual value to it too.

Those that are strong Christian believers find it apt to bear this art to commemorate the sacrifice, as well as the greatness of Jesus Christ, while some of them bear it for personal reasons, instead of religious reasons. They are those that want to symbolize their achievements with the help of the crown symbol.

In tattoo art, the crown is utilized in patriotic imagery for countries where monarchy survives, and it is utilized with iron too, worn by fools or pretenders. Sometimes, hearts of luck symbols are crowned, where crowning sets a seal of significance or transcendence upon such symbols.

Shifting away from their original meaning of the divine authority grant emblem, the crown tattoos are highly personalized, as all other ink marks are. They may be a joint sign of a certain group, symbolizing the power of the leadership of that group.

In a personal hierarchy, it is an aspiration for royal status, a symbol of nobility and pride. Also, crown tattoos stand for a ruling of one’s own life, emotionally elevated status, noble thoughts, as well as actions, control, and righteousness, a taming element reminding its bearer to utilize his or her powers in the wise and just way.

Despite all those meanings which we mentioned above, you can apply your meanings to your crown tattoo design. The crown is a symbolic symbol of many cultures around the world. As we already said, some of the most common meanings that crown tattoos can have are power, leadership, royalty, authority, divine inspiration, justice, legitimacy, immortality, good luck, self-control, importance, control, ownership, Jesus, Christianity and a lot more of which you can choose to apply to your crown tattoo.

However, remember that the most common meanings are authority, power, and leadership. Most commonly, a crown is designed with a bunch of different symbols. It indicates the importance of this symbol in the life of one person. It can also symbolize the control you have over your life, in general.