Bettie Mae Page, born on the 22-IV-1923, and died on 11-XII-2008, was an American model who gained an important profile in the 1950s for her pinup photos. Usually referred to as the “Queen of Pinups,” her jet-black hair, blue eyes, as well as trademark fringe influenced artists for generations.

A native of Nashville, Tennessee, Page lived in California in her early adult years, before she moved to New York City to try working as an actress. There, she started to work as a pinup model, and she posed for dozens of photographers throughout the 1950s. Page was also “Miss January 1955”, one of the earliest Playmates of the Month for Playboy magazine.

In 1959, she converted to evangelic Christianity, and she worked for Billy Graham, studying at Bible colleges in Los Angeles and Portland, Oregon, with the intention to become a missionary. The following part of her life was characterized by depression, as well as violent mood swings, and a few years in a state psychiatric hospital, suffering from paranoid schizophrenia. After some years of obscurity, she experienced a resurgence of popularity in the 1980s. 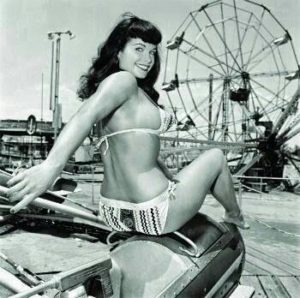 According to a long-time friend, as well as business agent Mark Roesler, Bettie Mae Page was hospitalized in critical condition on the 6th of December, 2008. He was quoted by the Associated Press that Page has suffered a heart attack and by Los Angeles television station KNBC as claiming that Page was suffering from pneumonia. Her family agreed to discontinue life support, so she died at 18:41 PST on the 11th of December, 2008.

Bettie Mae Page epitomized a type of tattoo which represents an important percentage of those acquired by men. Though not particularly symbolic, the art of the pinup girl is intimately connected to the emergence of tattoo in the West. Descending from early mariner tattoos of mermaids or hula girls, Page is a sex symbol, plain and simple, and a modern icon of the male libido.

Even while she is transmitting direct sex appeal and is intentionally flirtatious, Bettie Mae Page also had a look that was unpretentious. This latter aspect is the real hallmark of the “Queen of Pinups,” and like that, she made a tremendous impact on the tattoo culture, especially in the traditional American tattoo style.