The Stork is most frequently associated with the bringing of babies, dangling from slings suspended from their long beaks. In history, the Stork has often been associated with good fortune, owing partly to its ability to kill snakes and also its link with water, which is always a life-giving symbol. In the East, the Stork is a symbol of longevity and also familial love and devotion.

The origin of the iconic Stork carrying a newborn baby bundle in its beak comes from a few potential reasons. One is the migratory return of the bird at springtime, a time of revitalization and rebirth of the earth. Our ancestors observed the Stork’s coming back at a time of earth’s recovery and established reasoning that this bird was also the bringer of the new birth. 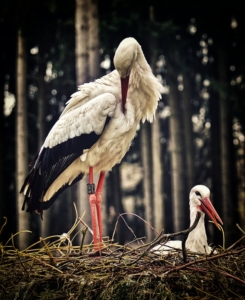 The symbolism of the Stork as a baby-bringer may also be associated with its affinity to water. Water is highly important in feminine energy. It’s also symbolic of recovery, rebirth, and creation. In ancient times and earth worshipping wisdom, ponds and lakes were a symbolic parallel to the womb. This is a large scale illustration of birth. European folk tales attest to seeing a ‘birdman’ emerging from the earth’s womb to bring forth new life. Another fairytale comparison originates from an old country folk belief that the spirit of unborn children inhabit the bodies of water where the Stork was known to stalk. Waiting to be harvest by a stork passing by, these babies were then delivered to new mothers.

So as we see in addition to a symbol of birth, this magnificent bird also symbolizes motherhood. More particularly, the Greek etymology behind the word Stork is “mother’s love. “This fully continues the link between storks, babies, and mothers.

Furthermore, there is even a German fairy tale that further confirmes the Stork as a mother bird. A German countrywoman found a wounded stork and restored it to health. As gratitude, the bird returned to her and gave her a magical donnerkeil, which is a stork-stone, also known as a lightning stone. During this era, lightning was considered to be a symbol of fertilization, and the stone is a symbol of a seed or egg. Hence – birth and motherhood.

Additionally, some colonists of North America observed storks lining their nests with maple leaves. After that, maples leaves, and the Stork have been symbols of love and welcoming a new child in the home (nest).

This beautiful animal is also considered as a divine symbol to Juno, a Roman goddess of hearth and home (Hera is her Greek variation). A homestead goddess refers to a deity that is a fierce protector of the home. She is thought to be a warrior for protection and security of the home, and Hera (her Greek counterpart) is known to this day as responsible for keeping the home fires burning. According to this, we see the Stork as a sign of protection.

In reality, the Stork is a dedicated protector of their nests. Their size aided in protecting their nests, as the Stork unfurls it’s (up to) 10-foot wingspan to scare off potential predators.  In addition to this, storks are predominantly monogamous, which means that they prefer one mate over its lifetime.

If we put the maternity issues aside, the symbolic meaning of the Stork also revolves around prosperity and long life. The Chinese wisdom presents the bird as a symbol of a long life because the bird lives to a long, ripe old age.

Storks are believed to be a good luck charm in Asian cultures. This is commonly connected to the fact that the stork diving into the waters and retrieving tasty presents. This is a meaningful message of fishing for prosperity from unseen sources and searching underneath the surface of the water, to discover hidden treasures. Storks were considered to be incredibly lucky at cool fishing stuff from dark, watery depths.

In Christianity, the meaning of this bird also deals with purification. This idea originates from the known fact that the Stork is hunting, catching, and eating snakes. Serpents in Christian religion and symbology are commonly thought to be in league with the devil. Thus, a snake-eating Stork is akin to cleansing the world of sin and the devil’s influence.

The symbolic meaning of the Stork as a tattoo design:

This tattoo motif is perfect for those who consider themselves animal lovers or bird lovers, especially storks. Furthermore, it is ideal if you want to convey some of the symbolic meanings that this tattoo carries.  If you decide that your permanent companion should become a stork, and then, first of all, determine the location of the image, as well as its size. A too-small bird will not look very good; the ideal option is a complete picture on the back or the biceps.