Greek mythology is the body of myths and stories originally told by the ancient Greeks. These stories and myths concern the origins and nature of the world, gods, heroes, rituals, and even evil spirits from those times. The more critical Greeks recognized that the mythology contained an element of fiction. One such person was the philosopher Plato (5th and 4th century BCE).

Generally said, Greek mythology had subsequently extensive influence on the literature and arts of Western civilization. People of all countries, stages and eras of civilization developed myths that explain the existence and workings of natural phenomena, recount the deeds of heroes and gods, or seek to justify political or social institutions. However, the Greek myths remained unrivaled in the Western world as sources of appealing and imaginative ideas. 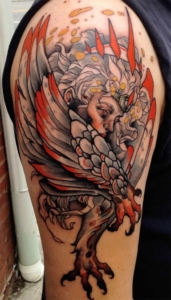 Greek mythology-inspired poets, as well as artists from ancient times. They also discovered contemporary importance and relevance in the classical mythological themes. Greek mythology themes are also an inspiration for beautiful tattoo designs.

Such Greek mythology-inspired tattoos are tattoos of harpies. Below, we will talk about harpies, who are they and what do they symbolize as tattoo designs?

In Greek and Roman mythology, a harpy represents a half-human and half-bird personification of storm winds, in the Homeric poems. The general depiction of a harpy was as a bird with the head of maidens. It was also with a pale face and with hunger and long claws on its hands.

Roman and Byzantine writers detail the ugliness of the harpy. Pottery art depicting this mythological creature feature beautiful women with wings. Ovid also described the harpy as a human vulture.

Originally, the harpies were wind spirits. Their name actually means “snatchers” or “swift robbers,” and they steal food from their victims. They do that while they are eating, and they also carry evildoers to the Erinyes. In those times, when a person suddenly disappeared from the earth, people said that the harpies carried him or her off.

In this way, harpies carried off the daughters of king Pandareus. They also gave his daughters as servants to the Erinyes. In this form, they were actually the agents of punishment who abducted people and tortured them on the way to Tartarus. Harpies were definitely cruel, vicious, and violent.

People also called the harpies “the hounds of mighty Zeus” and “ministers of the Thunderer (Zeus).” Later, some writers listed harpies among the guardians of the Underworld among some other monstrosities. These include Scylla, Centaurs, Briareus, Hydra, Gorgons, Chimera, Geryon, Lernaean, and so on.

Greek mythology represents harpies as three sisters, named Aello, Celaeno, and Ocypete. They were the daughters of the sea giant, the divine Thaumas, and the queen of the sea and river expanses, Oceanid Electra. These sisters personified various elements – Aello personified vortex, Ocypete swift, and Celaeno gloomy. They are the virtuosos of sudden death.

As we all know, people strive to decorate their bodies with tattoos for a long time. Ancient Egyptians, Romans, Indians of different American tribes were putting signs in the form of tattoos on their skin.

However, earlier people showed their occupations, such as hunters, shamans, and warriors through these signs. Or, they were also putting different amulets on their bodies, believing that they are going to help them. The meanings of various tattoos nowadays have expanded.

Just like we said, harpies are the evil spirits of classical Greek mythology. They are monsters with wings, with their bodies of birds and heads of women. They also have sharp claws and rank, as well as disgusting odor. Their symbolism often is vicious lust, and obsession, still completed with guilt once they feel satisfied.

Moreover, given all from above, it is obvious that harpy tattoos may have some of the following interpretations and meanings:

Harpies are evil characters that represent obsession and lust. However, at one time they were creatures associated more with wind’s power than evildoing. They were intriguing and interesting creatures, which is another perfect idea for a cool mythology-inspired tattoo.

Some other associations of harpy tattoos are with whirlpools, sudden death, and storms. This is actually the feminine essence of the destructive elements. Harpies are the abductors of human souls and babies, demonic creatures that terrify every living thing in the world.

This really makes harpy tattoos stand out a traditional style in the best way. However, the neo-traditional versions will be an excellent option too. If you love tattoos that have a mythological background, consider harpy tattoo for your following artwork.

Generally said, although evil spirits, harpies make beautiful tattoo designs, which are most-preferred among many people. Just like we said, they are definitely popular among people who love mythology, especially those with Greek origins.