Tattoos of animals are actually very popular, and their symbolism may be quite strong. It is not a surprise that bird tattoos have a very special place in the tattoo world. Birds were always fascinating creatures for people so that they may have a lot of symbolic meanings, like the crane tattoo and its symbolism.

The crane is usually renowned for its beauty, as well as intricate mating rituals. From the American Great Plains and to the shores of the Aegean Sea, the cranes were entangled in mythologies, folklore, as well as a legend which stretch far into the distant past. 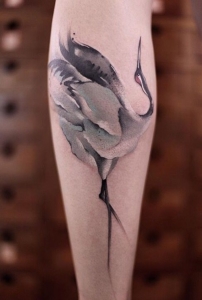 The crane is a type of a tall bird with long legs, as well as long neck. This bird has usually gray or also white plumage and red skin on its head. You probably heard about this bird as it is known for its romantic dances. Moreover, the crane is famous for its beautiful appearance, and mating rituals which may be too complicated.

In a lot of different countries, the crane has different symbolism, but in the world of tattoos, there are a couple of meanings which are typical for this bird. Before you decide to decorate your body with a tattoo of a crane, you have to know the meaning and symbolism that it has.

The crane is actually one of the few animals whose symbolism runs very deep in both the Eastern and Western cultures. In the West, the crane was an object of marvel as of its wingspan and ability to fly long distances. The Egyptian peoples revered this bird which was also known as the killer of snakes. It’s mating dance also provided the model for the ‘crane dance’ which is celebrated in Greek culture as the sublime expression of the joy of love and life.

First of all, we need to say that the crane is the symbol of beauty and grace. As we already mentioned, the crane is often considered as a symbol of perfection, as well as purity and fortune.

Cranes are also symbols of hope and prosperity. In ancient Greece, they have been seen as representatives of Apollo, the Sun God, heralding the coming light, as well as new opportunities.

These birds may also symbolize peace, as well as fidelity and faithfulness in a relationship or also a marriage. There is no doubt that a crane may also be a symbol of forgiveness and Christ itself. We already mentioned that this bird was always seen as an important religious symbol and it has been considered the messenger of the gods.

Also, a crane may be a symbol of health and longevity, but sometimes, it may simply symbolize eternal youth too. If you think that you possess any of these traits and if you would like to have a tattoo that is going to be meaningful and attractive too, you have to think about this type of tattoo, definitely.

In the Christian tradition, the cranes are seen as religious icons. They are a symbol of grace and purity. Part of their image as a religious icon could come from the predilection of cranes for hunting snakes. Snakes are often emblems of evil and totems of the devil, and as being such, an animal renowned for the skill of defeating them is also seen as a representative of God.

In the Far East, the crane was widely revered as a symbol of longevity, good fortune, and fidelity, since these birds mate for life. In Japan, this bird was seen as a national treasure.

Many times in the Chinese and Japanese art, as well as Japanese tattoo imagery, the crane is paired with other symbols of longevity like pine, trees, tortoise, stones, or also bamboos. Cranes are also usually depicted accompanying the Sun, which is a symbol of ambition.

While the Japanese believed that cranes live thousands of years, Taoists connected them with immortality. With their pure white body feathers, the black feathers of the neck, as well as the trailing edges of their long wings, and a small patch of red feathers on the crown of their heads, much of their beauty in tattoo imagery is derived from the shading of the feathered wings and the judicious juxtaposition of a limited number of colors.

Considered the oldest bird on the planet Earth, the crane captured the human imagination with its beauty, as well as longevity and intelligence. Legends, and also myths have grown up around this elegant bird in every continent where it actually dwells. Of the great variety of this species, the Japanese crane is probably the most universally recognizable because of its gorgeous red crown set upon a cloak of white feathers.

It is widely believed that those people that choose this type of tattoo are often well-balanced people that often have a very active lifestyle. These tattoos are actually common among men than among women as they help men express their courage and fearlessness.

We hope that we helped you understand better what a crane tattoo may mean and why a lot of people choose to have it on their bodies.