Home
Blog
Borneo Rosette, Our Connection With Nature And Our Desire For Security.

Borneo, which is an island taking part in the Malay Archipelago southwest of the Philippines. Borneo island is one of the places in which the art of tattooing continues to be practiced in a tradition which may stretch back thousands of years.

In this region, which is home to a few native tribes like the Ibans, Kayans, and Kenyahs, the Borneo Rosette, which is a Dayak tattoo, tends to be the center of the attention. Usually tattooed on the shoulders of many local warriors, two rosette motifs can be found, one on each shoulder. 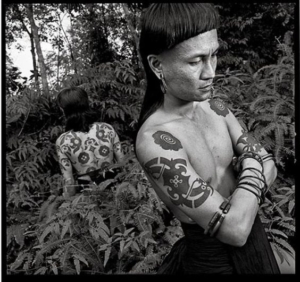 Males in Borneo usually received tattoos in honor of the achievement, especially achievement in war, as well as headhunting. However, it is widely believed that this Rosette was a common Kayan design that spread out to some other Borneo tribes, with its meaning lost in translation. The “rosette,” which is found on the fronts and backs of the shoulder region, is a stylized eye of the Aso, which is the mythical dog or dragon, which is associated with protection from evil spirits. However, in the 1990s, the Kayan people have adopted another name of this design, which was a Kayan word, “jalaut” for the fruit of a plant which was recently introduced to this region.

Among the Rundum Muruts of Northern Borneo, stars on the front of the shoulder, as well as above the breast, represented that ahead has been taken. When the third head had been taken, another star has been placed on the throat.

The tattoo designs of Borneo serve as a great and important reminder that mankind has a long-standing history of tattooing. In fact, in the past, tattooing rituals were even more culturally relevant, even considered sacred by some people. Even though these tattoo designs have an ancient allure, they also resonate with modern mentalities, celebrating our relationship to nature, as well as our desire for security.